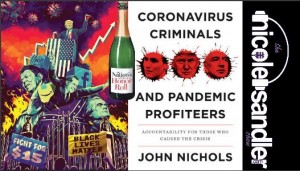 We’ve now passed the one-year mark of the post-Trump presidency, but like other former presidents, that one won’t go away.

I realized last week that I had entirely forgotten about the annual Progressive Honor Roll, as designated by John Nichols and his colleagues at The Nation magazine. I think I’ve had John on as a guest every year for the past decade reviewing the progressive heroes of the previous year. So, I reached out to invite him on, belatedly.

And learned that John’s new book will be officially released tomorrow. So perfect timing having him on today!

It’s titled, Coronavirus Criminals and Pandemic Profiteers: Accountability for Those Who Caused the Crisis. The Nation posted an excerpt today, which you can read here.

Obviously, we’ve got lots to talk about, and I have a few choice words to offer Bill Maher and his girlfriend Bari Weiss to start the show.