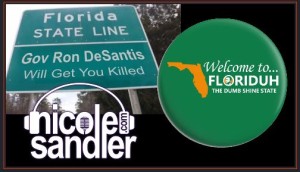 The fascist man occupying the Governor’s mansion in Tallahassee FL continues his assault on reason and his attempts to turn the state into a theocracy ruled by an authoritarian. Earlier this week, we learned about his move to turn Florida’s truly liberal arts college, The New College, from its mission of inclusion, diversity and a place that’s become a haven for LGBTQ students to a “conservative” leaning institution modeled on Hillsdale College– a private Christian liberal arts college in Michigan.

And just yesterday, he held a rally-style event with his closest *medical* advisors, spreading misinformation about COVID-19 and the vaccines with his shady anti-vaxxer surgeon general, and another so-called doctor who told the crowd to forget about the vaccine and instead, pray to Jesus.

I kid you not.

Sadly, Florida does not have a capable, organized Democratic Party to counter such insanity. Luckily there is a group of dedicated progressives working to gain influence over the negligent and embarrassing group of bureaucrats who hold the positions of power in the FDP.