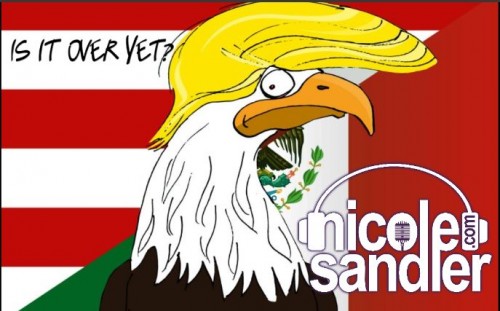 Five days to go, and this nation has never looked uglier. From the latest revelations about the inmates controlling the asylum at the FBI to voter intimidation and suppression, I’m re-thinking my decision to come back from sick leave before this shit storm subsided.

I do remain satisfied that I voted the correct way. Despite being told that I’m trying to scare everyone about Trump as a means to get them to vote for Clinton, I’m just doing what I always do– calling it the way I see it. The thought of a Trump presidency not only scares the shit out of me, it’s freaking out the rest of the world too. It would  be utterly irresponsible of us to, as one caller yesterday explained of his vote, punish the DNC for what they did to Bernie by voting for Trump. Yes, I called him an idiot, and stand by that assessment.

Am I happy that the only other viable choice is Hillary Clinton? Hell no. Nor are any of a lot of other people who I like and respect, but realize the enormity of the mess we’d allow were he to win.

Howie Klein is one of those people. As the driving force behind the Blue America PAC, his work is turning Congress progressive!  But he admitted that, if he lived in Florida, Ohio or one of the other in-play swing states, he’d have to vote for her. It’s the adult thing to do.

Tomorrow is my last show before election day… we’ll open the phones again. But it’s also my birthday, so be nice, and I’ll try to be nice back!