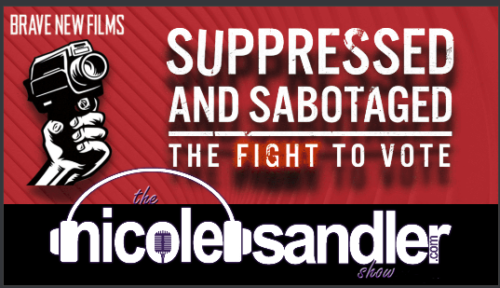 Robert Greenwald founded Brave New Films over 20 years ago with a film called Unprecedented: The 2000 Presidential Election.  Obviously, it was a travesty that deserved to be memorialized in film. For BNF, it was a highwater benchmark from which to begin a series of issues oriented documentaries.

Their newest release, just out, is what’s needed at this fraught time in the lifespan of our democracy… Suppressed and Sabotaged: The Fight to Vote.

Today, I’m joined by BNF Founder and President Robert Greenwald and program manager Carmen Samuel  to tell us about the film, why it’s needed, and how to host your own screening.

A few links to help you participate:

We will set up a screening of the film so we can watch it together and then have a discussion around it… stay tuned for details.

But if you want to watch it now, here it is