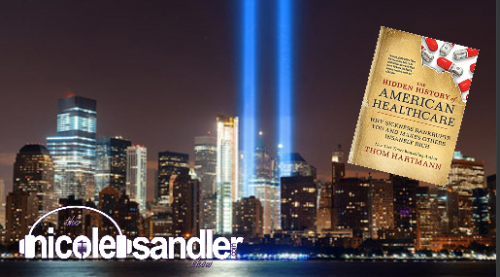 Tomorrow marks the 20th anniversary of the 9/11 attacks, and the memories are as fresh as if it happened yesterday. We’ll look back at that awful day. But I’ll give you a suggestion to help ease the anxiety that comes with all of the video of the planes crashing into the World Trade Center that permeated the airwaves until the public demanded they stop showing it all the time.

And a few words about another blast from the past who re-emerged after a long, sudden absence.

Our guest today is Thom Hartmann, radio host and author of many books. He returns to the show to discuss his brand new one, The Hidden History of American Healthcare: Why Sickness Bankrupts You and Makes Others Insanely Rich,  just released this week.

I said I’d share a 9-11 audio montage that I couldn’t play on the air, so here it is. It features John Ondrasik and Five for Fighting, and the song “Superman” that the first responders embraced as an anthem. I believe it’s included in this show, from 9-11-2008, seven years after the attack, when John joined me to talk about the impact of that song.