8-17-21 The Nicole Sandler Show – 52 Years After Woodstock, Time for Songs of Peace with Melanie 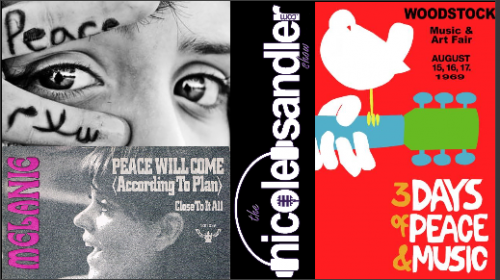 On this day in 1969, Woodstock was in its final day of Peace and Music. Melanie Safka (better known to us simply as Melanie) performed on the first day. This week, she re-created her Woodstock set and shared it online.

Today, I figured we could use an injection of peace and the energy of Woodstock, so Melanie will join us for the second half of the show.

But we’ll begin with the response to the US pullout of troops from Afghanistan. President Biden is taking loads of criticism, most of it seemingly from the media. I believe most of the criticism is unwarranted. After all, he finally got us out of this war after 20 years!

I shared Fareed Zakaria’s Washington Post op-ed titled “We Lost the War in Afghanistan Long Ago”. You need to read it…

As we watch the tragedy unfolding in Afghanistan, let us first dispense with the fantasy that the United States was maintaining the peace there with just a few thousand troops and that this situation could have been managed with this small commitment. For the past couple of years, it looked that way to Americans because Washington had made a deal with the Taliban and, as a result, the Taliban was deliberately not attacking U.S. and coalition forces.

For the Afghans themselves, the war was intensifying. In the summer of 2019, the Afghan Army and police force suffered their worst casualties in the two decades of fighting. It was also the worst period for Afghan civilian casualties in a decade. In 2018, when the United States had four times as many troops as this year, the fighting was so brutal that 282,000 Afghan civilians were displaced from their homes in the countryside. Frustration with the Afghan government and its U.S. patrons was rising. A U.S. government survey done that year showed that Afghan support for U.S. troops was at 55 percent, down from 90 percent a decade earlier.

You have heard people suggest that the withdrawal should have been a year or two later. Consider this news report in the Guardian in 2016: “Afghan Forces Lose Ground to Taliban Despite Delayed US Troop Withdrawal.” The story pointed out that the U.S. military had persuaded Barack Obama to delay the troop withdrawals he had already delayed a year earlier, but despite having robust U.S. forces and significant air power, the central government’s control dropped to only about 65 percent of the country’s districts.

Some of the data I have cited comes from a powerful new book, “The American War in Afghanistan,” by Carter Malkasian, who served as a civilian officer in Helmand province and rose to become senior advisor to the chairman of the Joint Chiefs of Staff. Drawing his conclusions from the book in a Politico essay, he begins by noting, “there can be little doubt that we lost the war.” The United States spent 20 years, $2 trillion, commanded at their peak 130,000 coalition troops, built up an Afghan security force of 300,000 (at least on paper), and used the world’s most sophisticated and lethal air power. Still, it was unable to defeat an ill-equipped Taliban force of perhaps 75,000. Why?

Malkasian tries to answer the question, which he admits has puzzled him for the 12 years since he became engaged with Afghanistan and watched “in battle after battle, numerically superior and better-supplied soldiers … being defeated by poorly resourced and unexceptionally led Taliban.” In the past few weeks, the most extraordinary sight has been to see how little the Afghan army and police have fought back, often melting away at the sight of the invading Taliban force. Malkasian’s basic answer comes from a Taliban scholar he met in Kandahar in 2019. “The Taliban fight for belief, for janat (heaven) and ghazi (killing infidels). … The army and police fight for money.”

To be sure, Afghan soldiers were also unable or unwilling to turn back the Taliban advance because they were not getting the supplies and backup they needed from their leaders. That’s not surprising given the many problems with the Afghan government. While democratically elected, it lacked broad support. In the 2019 election, just over 1.8 million people voted in a country with a population of 39 million. Corruption was endemic and billions of dollars of U.S. aid, sloshed around carelessly, made it much worse. The government never truly incorporated the rural Pashtun community, from which the Taliban draws its greatest strength.

But above all, that government’s legitimacy was crippled because it survived only thanks to the support of a foreign power. Afghan identity is closely tied to resistance against foreign invasion, particularly the invasion of infidels. (Afghan history glorifies the century-long struggle against the British and the jihad against the godless Soviet Union.) It is easy to use these tropes to mobilize nationalism and religious devotion, which powerfully fuel the will to fight and die. The Ashraf Ghani government had no countervailing narrative of equal intensity to inspire its troops.

The United States had been watching the Taliban gain ground in Afghanistan for years now. It is rich and powerful enough to have been able to mask that reality through a steady stream of counter-attacks and air, missile and drone strikes. But none of that changed the fact that, despite all its efforts, it had not been able to achieve victory — it could not defeat the Taliban. Could it have withdrawn better, more slowly, in a different season, after more negotiations? Certainly. This withdrawal has been poorly planned and executed. But the naked truth is this: There is no elegant way to lose a war.

Now on to Melanie. I hope you listen to the interview… If you see this in the next few hours, you can still catch her Woodstock re-creation.

I shared these two videos. Do check out Melanie’s YouTube channel. There are tons of gems there….