7-26-22 Nicole Sandler Show – From Columbine to Uvalde, Aurora to Buffalo, Put Down the Damn Guns 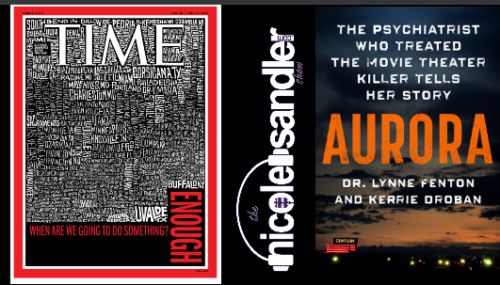 Here in the blue enclave of Broward County Florida, and especially in the towns of Parkland and Coral Springs, the horrific events of Feb 14, 2018 are again top of mind, in our faces and the memories haunt our psyches. That’s because the killer is on trial.

He actually pleaded guilty to 17 counts of murder and 17 additional counts of attempted murder. This trial is the penalty phase, to determine whether that sorry excuse for a man lives or dies. They expect the trial to last four to six months. So much for his guilty plea relieving the families of having to live through a trial with all the gory details of how their children were murdered dredged up from the grave.

And the nation is still dealing with the latest mass shootings in Uvalde and Buffalo.. It’s past time we do something about it.

Ten years ago this week, a man entered a movie theater showing a midnight screening of the new film, “Joker” and opened fire, killing 12 people and injuring 70 others. This week, a new book about that shooter was released. Today, I speak with Dr. Lynne Fenton, author of Aurora: The Psychiatrist Who Treated the Movie Theater Killer Tells Her Story.

She was outed as a psychiatrist who treated the killer, but obviously couldn’t stop him…

Here’s the Eleven Films video I played at the end of the show.