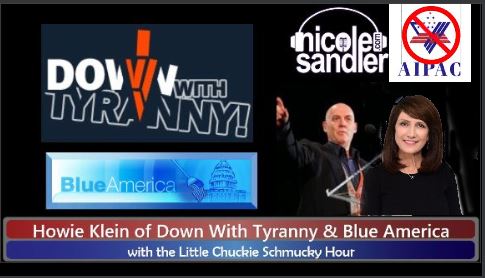 Howie Klein has been joining me for a weekly conversation for well over 10 years now. The one consistent theme through the years has been the push to elect more progressives to Congress. The results rival every roller coaster you’ve ever ridden.

Progressives pick up a few seats, but also lose some. And while the fight should be against the Republicans, we’re too often beating back attacks from the establishment Democrats who, in many cases, should have retired years earlier to let younger candidates step up to shape their own futures.

Today, Howie and I are joined by Representative Marie Newman who, two years ago, unseated perennial conservadem Dan Lipinksi. Finally, a progressive takes out the ‘Democrat’ who voted most often with the Republicans. But she was a target in her primary for the establishment/conservaDems. Howie has a new piece up at DWT about the situation.

This time, they aligned with big money from AIPAC and a shady dark money PAC (that many allege is affiliated with Speaker wanna be Hakim Jefferies), and they defeated Newman in her primary with another incumbent, the more centrist Sean Casten. But now, there’s a new development in the story…. Casten returned the money from AIPAC — after accepting their help to defeat Marie Newman, he’s now dissing them? We’ll try to get to the bottom of it all today on the show with Marie Newman and Howie Klein…