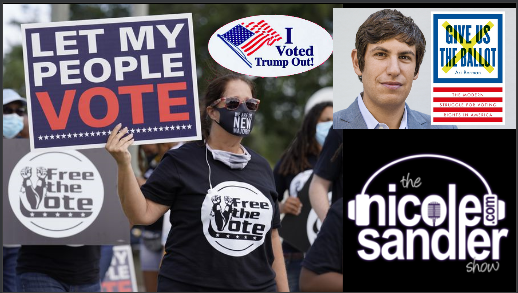 Our right to vote is hanging by a thread. That thread is somehow controlled by the GOP and Sen Joe Manchin, despite the fact that the Democrats control both houses of Congress and the Oval Office.

Mother Jones‘ Ari Berman has been writing about the Republican party’s assault on voting rights for many years. His latest article is the cover story of the current issue, “Jim Crow Killed Voting Rights for Generations. Now the GOP is Repeating History“.

Ari is my guest today, explaining the sickening situation we’re forced to deal with now..

I did share Leonard Pitt’s brilliant column from today’s Miami Herald. It’s worth posting here so you can read it too:

As Americans, we are pleased to call ourselves one of the world’s oldest democracies. We are actually one of the world’s newest. Democracy, after all, is government shaped by the will of the people. But until 1920, roughly half the people were not allowed to vote, disqualified by dint of gender. And until 1965 — 56 years ago — roughly 10 percent were restricted by color of skin.

So American democracy is not even as old as you are. Its newness — its recentness — is invoked here to help you understand the trepidation with which some of us regard the dozens of bills being pondered and passed in Republican-led statehouses across the country with the intention and certain effect of keeping us from voting. As part of a demographic whose access to that right has never been impeded, perhaps you find it difficult to appreciate the profound distress and sense of historical déjà vu some of us are now processing.

To say nothing of our equally profound disappointment in those who could defend us choosing instead to let us down, failing to meet the moment with the urgency it requires. Sadly, that’s a category into which you fall.

“The right to vote is fundamental to our American democracy,” you wrote in a Sunday op-ed in the Charleston Gazette-Mail of West Virginia. You then spent a thousand words explaining why you will not protect this right by supporting the For The People Act, which would end partisan gerrymandering, punish those who try to intimidate voters and streamline voter registration, among other urgently needed reforms. Your argument boils down to: I won’t vote for the bill because it doesn’t have bipartisan support. You lodge no other complaint against it.

But your reasoning is nonsensical. Would you decline to support a For The Chickens Act solely because the foxes refused to sign on?

Yes, you did signal a willingness to vote for a companion bill, the John Lewis Voting Rights Advancement Act, which would repair the Voting Rights Act that was gutted by the Supreme Court in 2013. But even here, your support is conditioned upon Republican buy-in; you have flatly ruled out ending — or even carving out a one-time exemption from — the filibuster, a parliamentary procedure that allows a minority party to block legislation the majority approves.

There has been much speculation on why you’re doing this. Some say you enjoy the attention. Some say you’re not very smart. But the scariest idea is that you are sincere, that you truly believe this radical (and unrequited) commitment to bipartisanship is what’s best. It’s entirely possible, however, to be sincere and yet, sincerely wrong.

And you are. In effect, you ask those of us who face the loss of our voting rights to trust you as you wager those rights on Republican integrity and good faith. But as recent years have proven ad nauseam, those are qualities your colleagues have in vanishingly short supply.

Moreover, if America is what America says, then my ballot is not yours to gamble with. Bipartisanship is very important, yes, but the right to vote is sacred — “fundamental,” to use your word. When you prioritize the former above the latter, you echo all the other times this country has made us the fulcrum of its moral compromises, deemed something else to be of more importance than our rights as human beings.

Sir, the error you are making is seismic and potentially tragic. Reconsider, please.