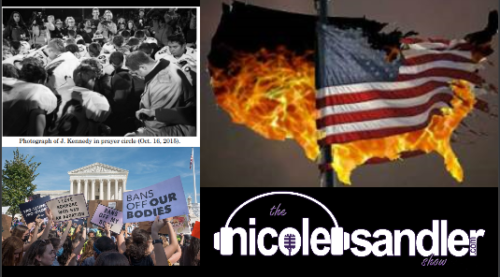 As we watch this illegitimate incarnation of the “Supreme” Court dismantling the freedoms we’ve lived with for 50 years or more, today I’m joined by someone who was there at the start of the fight for reproductive rights.

Bill Baird is recognized widely as the “Father of the birth control and abortion-rights movement. He was jailed eight times in five states in the 1960s for lecturing on abortion and birth control, and is believed to be the first and only non-lawyer in American history with three Supreme Court victories. He just celebrated his 90th birthday, but is still fighting for our rights. Today, he joins me to give us all a bit of a history lesson and explain why we must fight on!

There was other news today too. The “Supreme” Court today released a few more opinions, including one that continues its assault on the separation of church and state. We have a lot of messed up territory to cover today, so buckle in.

At the end of the interview, I told how a 19-year old pop star named Olivia Rodrigo brought British pop star Lily Allen on stage at the Glastonbury Festival, and dedicated Allen’s hit song, “Fuck You” to the five (in)justices of the “supreme” court. Well, playing that video got my video blocked on YouTube, so I’m editing it out. In the meantime, here’s the video of that performance

Once that’s trimmed out, the video of the whole show will appear below. In the meantime, you can listen via the audio embed at the top of the page