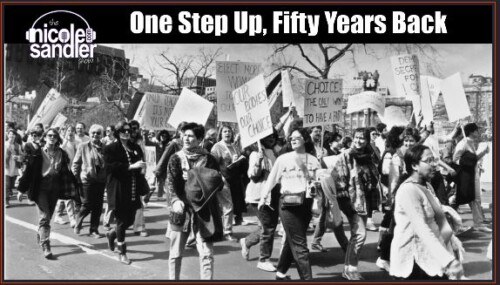 I’m still reeling from the leaked draft of a SCOTUS opinion that we weren’t supposed to see for another seven or eight weeks. But thanks to someone with a conscience who had access to the first draft of Justice Alito’s opinion in the case that will determine the future of women’s right to choose what happens with our bodies, we have the information early.

That should allow our side to fight back effectively, but it is the Democratic Party we’re talking about here, and they’ve been less than effective stewards of our democracy!

I’ve got some audio and some opinions to share, but today I want to hear from you too. So the phone lines are open at 954-889-6410 (or you can always Skype in to nicolesandler)…

And we’ll also check in with my favorite legal expert, Lisa Graves of True North Research, who spent years in the trenches as Deputy Assistant Attorney General in the Office of Legal Policy in the Clinton DOJ, and a long list of other credentials that make her the perfect person to weigh in on what’s happening now. Thankfully, she’s way more optimistic than I am, so I’ll try to adopt some of her positivity!

*Update from Nicole: I taped the segment with Lisa earlier in the day. I didn’t get to on today’s show because the phones were on fire. I will play Lisa’s segment tomorrow before talking with Howie Klein and Santa Claus!