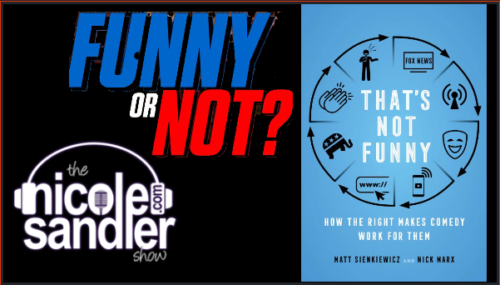 When my daughter was little, she’s always try to get out of trouble for things she said or did by claiming, “It was a joke!”. My response was always, “A joke is supposed to be funny.” And perhaps they were, to her!
More accurate would have been to say “comedy is subjective.” We know that.
I can’t say I’ve honestly given right wing comedians a chance to make me laugh. I just know that the few times I’ve tried, laughter was the last reaction elicited from me…
Today, I’ll speak with Nick Marx, one of the co-authors of a new book titled That’s Not Funny: How the Right Makes Comedy Work for Them.

At the beginning of the show, after dealing with this batch of mass shootings, I told you that we went to see Five For Fighting last night. It’s actually just one guy– John Ondrasik, and he’s an old friend of mine. He just recorded this song for the people of Ukraine, and especially President Zelinsky. It’s called “Can One Man Save the World?”