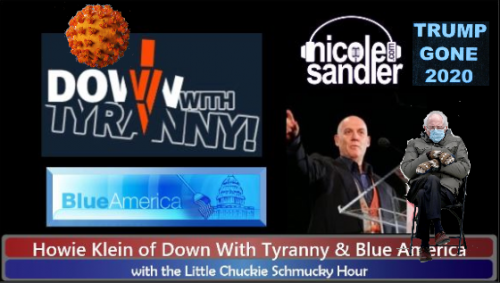 It’s Thursday, and the House is supposed to be in session today, but they’re not. That’s because the insurrection gang is threatening the Capitol again. The QAnon gang apparently believes that today is the day that Trump will be inaugurated as our 19th president. I know. I won’t even try to make sense of the insanity. Since the House is out today, they were busy yesterday. I’ll fill you in on all of that, and will explain what I found out about who designed the stage for CPAC last week that was undeniably in the shape of a symbol used by the Nazis in World War II.

Jacob Kornbluh, senior political reporter for The Forward, seems to be the only journalist to publish a story about the design firm, Design Foundry, taking credit for the stage at CPAC that turned out to be in the shape of a symbol used by the Nazis, and now appropriated by white supremacists.

As it is Thursday, Howie Klein will be here. When I asked if there’s anything specific he’d like to touch on, his response was simply, “How shitty the Democratic Party is?” Some things never change!