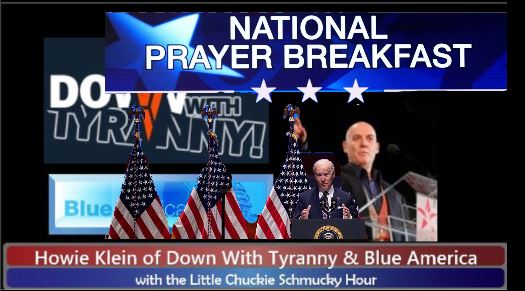 Today is Thursday, so Howie Klein (Down with Tyranny, Blue America PAC) joins in at the bottom of the hour. Lots to talk with him about including the smear campaign being waged against Rep. Marie Newman.

And, Howie introduced us to a new timely song from Steven Page, former lead singer of Barenaked Ladies. It’s called “Choose Young” – it’s posted here along with the great lyrics.

But we’ll begin today’s show by noting that despite separation of church and state was clearly the goal of the founders, today– 2022– there’s still something call the National Prayer Breakfast every year, and it was today. And this time, it was Joe Biden who I found most offensive… in an event that offends me at every turn. TYT Investigations managing editor Jonathan Larsen has been looking in to The Family and has some interesting news to share at the top of the show. His twitter thread today on the prayer breakfast is definitely worth reading.

…but only spoke to Religion News and CBN about it…

…and only spoke publicly about it one day before the event.https://t.co/9eQTLgmdCa 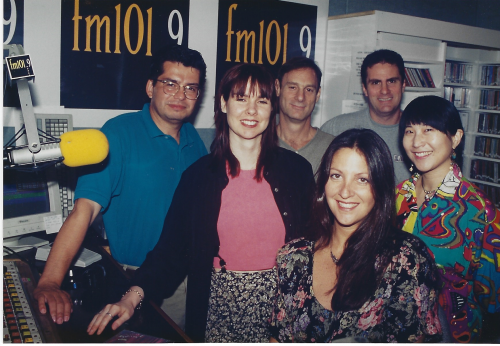 My, how time flies… this Friday, Friday, Feb. 4, 2022 marks the 25th anniversary of the day that fan favorite Triple A KSCA (FM 101.9)/Los Angeles signed off, as the sale from Gene Autry’s Golden West Broadcasters to Heftel was finalized, and the station flipped to Regional Mexican.
The news of KSCA’s sale and flip — after less than three years in the format — was considered significant enough to be covered not only in Billboard and The Orange Country Register, but also in the New York Times and the Los Angeles Times, which described the station’s demise as “The Day The Music Died.” The local KTLA Morning News even came out and did a remote hit from the KSCA studios on that final day.
Nicole Sandler was KSCA’s Music Director/morning & midday personality, Music Hall booker and webmaster. Now living in South Florida, and doing a daily live show based at nicolesandler.com, heard live on the Progressive Voices Network and other online stations, Nicole will be hosting a reunion/tribute show “to the little station that could,” this Friday, Feb. 4, at 5pm ET/2pm PT. She will be speaking with some of her former colleagues, artists and listeners and sharing some classic airchecks, etc. Already confirmed to participate: Dennis Constantine, Mimi Chen, Anita Gevinson, Terry Gladstone, Rami Jaffee of Foo Fighters, Peter Himmelman, Dan Navarro, Angela McCluskey and more. Please set a reminder to tune in.
Nicole is also building a nice KSCA tribute page at nicolesandler.com/ksca. If you or someone you know has any classic KSCA airchecks — especially of the station’s debut on July 2, 1994 — please contact Nicole at nicole at nicolesandler.com. Thank you!
Pictured, (l-r): Rich Guzman (production/overnights), Merilee Kelly (original afternoons), Chuck Moshontz (morning co-host with Sandler), Sandler, KSCA PD Mike Morrison, and Mimi Chen (nights, “Local Spotlight”).