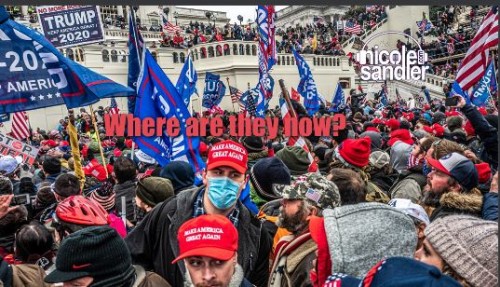 Not only are we fast approaching the new year, we’re also coming up on the one year anniversary of the attack on the US Capitol by a mob of Donald Trump supporters. We live in a nation of very gullible people. Many of them honestly believed the lies from TFG and thought they were saving our nation from those who seek to destroy it. (See: Opposite World).

Most of us watched in horror as the insurrectionists entered sacred American ground, and were further horrified when they were all allowed to leave, with no arrests that day. But now, over 700 of the insurrectionists, rioters and otherwise stupid fucking people were rounded up and charged with crimes.

I wanted to find out what progress is being made with these prosecutions. So I called on the one journalist I think is covering this episode in American history better than all the others: Marcy Wheeler at Emptywheel.net.

Marcy joins us for pretty much the entire hour. You may want to take notes. She’s got lots of info to share…