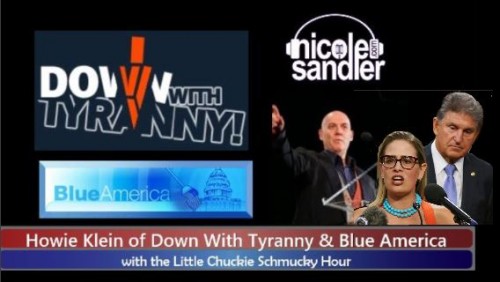 Although I don’t think that invoking “I told you so” is a good look, Howie Klein gets a pass today should he care to say it. Today’s the day that the reality hits that the Build Back Better act will not pass the senate before the end of the year. I guess I’m guilty of wishful thinking. Despite knowing deep down that Biden was the wrong man to lead us out of the Trump disaster, I tried to stay hopeful. I gave him the benefit of the doubt.

And I don’t put all the blame on him for the situation in which we now find ourselves… but he is at the “the buck stops here” desk.

Is it realistic to expect the president to control members of Congress in his party? The Republicans do. I used to think the Democrats were *better* because they didn’t take marching orders or recite talking points. But perhaps our side could use some of that discipline.

We’ll talk with Howie Klein today about that, and try to figure out how to turn this thing around. Good luck to us!

At the top of the hour, I spoke with Arthur Delaney of HuffPost, who had a run-in with Joe Manchin yesterday, as he was just trying to do his job!

I ended today’s show by playing a video of The Marsh Family performing “Have the New Jab,” their covid vaccine parody of Leonard Cohen’s “Hallelujah”.  I taped another interview with Marsh Family yesterday; we’ll hear it over the holidays. In the meantime…