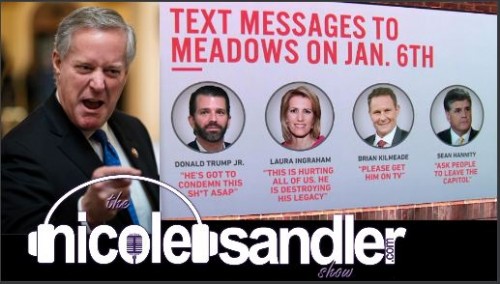 Our favorite legal expert Lisa Graves of True North Research joins in at the top of the show.  Our conversation mostly centers on the contempt of Congress charges against Mark Meadows and the significance of the text messages he received on January 6, imploring him to get Trump to stop the siege, that we learned of last night.

I also ask about the Supreme Court’s ruling on the Texas abortion case, which allows the law prohibiting all abortions after six weeks to continue while challenges against it proceed. CA Gov Gavin Newsom has taken their stance on that law and used it to enact a law allowing people to sue assault weapon and ghost gun manufacturers and distributors…

I ran out of time to get to Ryan Grim and his reporting on the new scam to privatize Medicare. So we’ll hear that tomorrow. In the meantime, please read Ryan’s piece up today at The Intercept: “Medicare Privatization Scheme Faced Legal Questions About Profiteering.”

Also, read Helaine Olen’s editorial in the Washington Post: “Trump had a scheme to privatize Medicare. The Biden administration isn’t stopping it.”

Donald Trump claimed to be a staunch supporter of Medicare. Yet he repeatedly attempted to slash the program’s budget while promoting an increased role in Medicare for insurers and other private businesses. But President Biden isn’t turning out to be the champion of Medicare activists had hoped.

At issue is a Trump administration-initiated program that many health-care reformers argue is essentially a backdoor attempt to further privatize Medicare. Almost no one realizes it’s going on — except, that is, corporate interests and private equity investors, who are lined up like pigs at the trough to get their hands on taxpayer dollars.

Medicare is administered in one of two ways: traditional fee-for-service Medicare and Medicare Advantage — private insurance offered in place of and through the Medicare system. The dispute is over something called the Direct Contracting pilot program, designed by the Center for Medicare and Medicaid Innovation as a new way of managing benefits in the fee-for-service program. Supporters say it will reduce the amount of money the government spends on traditional Medicare fee for service while improving the quality of patient care.

But many left-leaning health-care advocates say it’s a slippery slope version of Medicare Advantage. That program, as Just Care USA President Diane Archer points out, costs taxpayers more per patient than traditional Medicare, in part because of aggressive upcoding of risk assessments that determine how much money the insurer receives for covering the patient. And a 2018 report by the Department of Health and Human Services inspector general found “widespread and persistent” problems with Medicare Advantage programs inappropriately denying care. Opponents of the Direct Contracting program predict it will run up the government’s tab, add corporate bureaucracy, increase the financial strain on the Medicare trust fund and do nothing to improve patient outcomes.

Already, Direct Contracting is increasing the hold of Wall Street and the world of private equity on Medicare. The Centers for Medicare and Medicaid Services say 53 companies have signed up and have been approved to administer the program, which began earlier this year. They are, for the most part, a mix of publicly traded health-care companies and insurers, and private equity backed start-ups.

The lure of Direct Contracting for these companies is potential profits. The limits on the amount of money a Direct Contracting entity can keep that’s not used for a patient’s medical needs is significantly more generous than those imposed by Medicare Advantage

And while patients choose to sign up for Medicare Advantage themselves, with Direct Contracting, the primary care doctor, not the patient, enrolls in the program. And why would a doctor sign on? Well, one participant, Clover Health Partners, says doctors can earn upward of 40 percent more on primary care visits through the program. (When I asked about that, a spokesperson for Clover told me the higher pay did not affect how much Clover earned from Medicare.)

Once their doctor is enrolled, patients receive a letter from the Direct Contracting company informing them of their participation. They are assured they are still in Medicare’s fee-for-service program and can still see any doctor they wish in the Medicare program. “Your doctor asked Clover Health Partners to see that you get the right care at the right time,” reads the missive sent out by that company. “We will coordinate your care according to your individual medical needs and treatment choices.” The program will, it adds, “work to reduce duplicate tests and duplicate paperwork that cost you time and money.”

The technical term is to say a patient’s care is being “aligned” by the Direct Contracting entity. Heath-care activists use another phrase. “It’s Medicare Advantage by another name but suddenly it’s not voluntary,” Archer says. She argues that doctors in the program can also be incentivized to refer within a particular network or recommend a particular regimen of care. And unlike in Medicare Advantage, the patient won’t necessarily understand that there is a corporate monitor.

The Biden administration did put at least a temporary stop this year to an even more egregious version of this program, which would have auto-enrolled almost all those in Medicare fee for service in a particular preselected geographic area. But CMS, HHS and, ultimately, the White House are continuing to press ahead with Direct Contracting, even though they could end it if they chose.

So how could something like this fly so under the radar? Well, the details are very technical, so, many people receiving notice of the change likely didn’t comprehend it. The program itself has not received much attention from the media. And information about it isn’t all that easy to come by. We don’t even know for sure how many people are experiencing “aligned” care; CMS says that data won’t be available till next year.

But here’s what we can say: An undetermined number of people enrolled in traditional fee-for-service Medicare are now taking part in an experimental program designed during the Trump administration to increase the role of big business in their medical care. And the Biden administration, which could easily stop this, is instead continuing to enable Trump’s scheme. That’s a big mistake — one that it could easily fix.