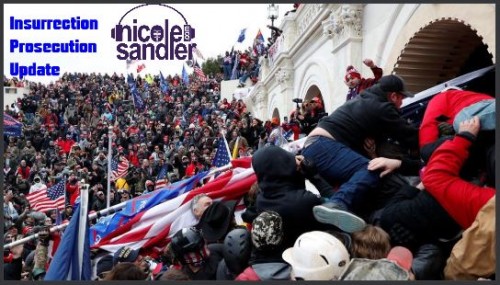 Last night sucked. People are pissed and they’re blaming the Biden administration and the Democrats. And I can’t say their blame is totally misplaced.

The Democrats have allowed their entire agenda to be hijacked by two Senators out of 50. Their priorities are their benefactors instead of their constituents and the future of this democracy. Rather than dwell on the election disappointments, we’ll find out what’s being done to hold the insurrectionists who attacked the Capitol on January 6 accountable for their actions.

The only journalist I know who’s dialing in to every hearing and reading every brief is Marcy Wheeler of emptywheel.net.

Marcy is our guest today for most of the hour, explaining that justice moves slowly but the wheels are in motion. We’ve got to take the good news whenever we can get it!

A program note: I’m taking the day off tomorrow. It’s my birthday! So a “best of” show will stream on our audio channels, but there won’t be a video feed. Any requests? Just put ’em in the comments section. Do you want news and politics, or would you rather take a musical break with one of my classic artist interviews? Let me know!

One last thing… I mentioned a Washington Post op-ed and said I’d post a link. I realized it’s behind a paywall, so here’s the text too…

In the end, L. Douglas Wilder was right about Terry McAuliffe.

Way back in December 2020, the former Virginia governor and Richmond mayor told Politico that he wondered why McAuliffe thought he was the answer to whatever it was that ailed the Democratic Party and Virginia as a whole:

“It would have to [have been] concluded by Mr. McAuliffe that things are in such dire shape, bad shape as far as the Democratic Party is concerned, that he has to do this — that he has himself considered the other candidates not worthy of the job,” Wilder said. “You just have to assume that. And the question then would be: Why?”

McAuliffe never had a definitive answer for “why.” And because he couldn’t tell people why they should give him a second stint in the Executive Mansion — something only Mills Godwin was able to achieve, under exotic circumstances, back in 1973 — voters simply couldn’t get excited about his candidacy.

And so McAuliffe lost to first-time candidate Glenn Youngkin. And the entire Democratic ticket went down with him. Republicans also reclaimed a slim majority in the House of Delegates for good measure.

That’s a stinging repudiation of McAuliffe, his ticket mates and House Democrats.

It also means McAuliffe, whose gubernatorial win-loss record falls to 1-2, is finished. That will hurt him personally, but the cold fact is Virginia voters have never been that into him. His bid for a second term always rubbed a lot of people the wrong way (see: Wilder, for example). Now they’ve made it clear the one-term limit means what it says. One term, and then goodbye and good luck to you.

This bit of electoral hygiene also means the incumbent, Ralph Northam (D), can shelve whatever vague sense he may have had about running again in the future. One term means one term.

Another of the night’s big losers: Attorney General Mark R. Herring, who made a big stretch asking voters to give him a third term in office, now gets to consider life after public service. We are left to wonder how things may have been different if Herring had taken U.S. District Court Judge David Novak’s suggestion to “do his job” seriously — not just in the pending lawsuit over the constitutionality of the House races conducted Tuesday night in districts Republicans drew in 2011, but over the course of his two terms.

Herring’s office had ample time to file friend of the court briefs in a slew of cases outside Virginia. Maybe if Herring had stuck closer to business at home, things might have been slightly different for him Tuesday night.

It was a thinly disguised “wait your turn” remark. It was bad enough on its own but even worse in hindsight, considering the first Black woman elected to statewide office is Republican lieutenant governor-elect Winsome Sears.

As for the winners, credit where it’s due: The Republican ticket rode the wave very well. Not expertly. Its House majority is razor-thin, and hot rumors of a fight over who will be the next speaker are already burning.

But for once, Republicans aren’t the ones writhing in recrimination and doubt. And, for once, they can look forward to the next elections — the 2022 congressional midterms — with genuine optimism.