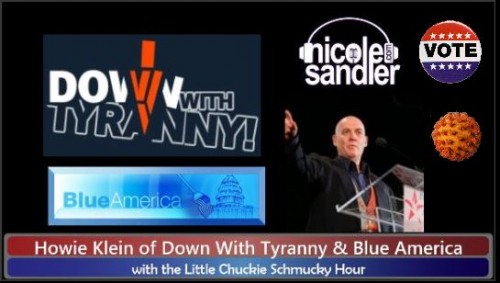 The news gets more outlandish with each passing day. Today, the feds announced they thwarted a plot to kidnap MI Gov Gretchen Whitmer and overthrow the government. Seriously. And Donald Trump, who announced his Covid-19 diagnosis just days ago now says he’s “cured” and is ready to hit the campaign trail and hold rallies again.

Today is Thursday, so Howie Klein returns for our weekly get-together. With a ton of crazy to choose from, we wound up going with a discussion about religious cults, one of which is driving new covid hotspots in NYC, and another claims Trump’s Supreme Court nominee as one of their own.

We had video issues today, so we won’t have video of the whole show. We did however, play three pretty awesome song parodies.. two of which feature Patti Lupone, so it’s not all bad!