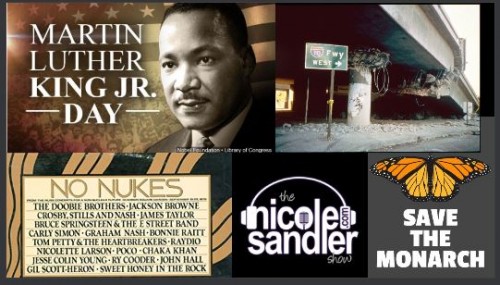 It’s Monday, January 17. It’s Martin Luther King Jr Day. The irony is seeing all of the Republican assholes who continue voting against the Voting Rights Act Tweeting out MLK quotes and such today. The hypocrisy is deafening.

It’s also the 28th anniversary of the Northridge Earthquake — the last big one in California, and I was there. I’ll share my memories of that morning, and why I’m living on borrowed time. I really should have died during that quake!

In the second half of today’s show, we’ll get into the save and protect sections… My guest is John Hall. (Yes, rescheduled from Friday). He’s a musician and songwriter with two huge hits under his belt with the band Orleans (“Dance with Me”, “Still the One”); he co-founded the group Musicians United for Safe Energy (MUSE) and helped organize the 1979 No Nukes concerts at Madison Square Garden. His song “Power” was its anthem.
He served two terms in Congress representing NY-19 (2007-11), then returned to the music world.
His new album is called “Reclaiming My Time,” featuring “Save the Monarchs” with special guest Dar Williams.

Since I messed up the audio on the video for “Save the Monarchs” I figured I’d post it here, along with “Power” from the No Nukes concerts. Enjoy!