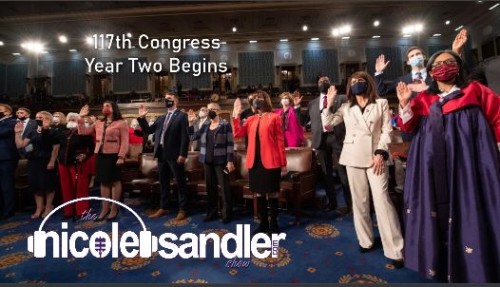 Each session of Congress lasts two years. Today, the House returns to convene the second half of the 117th Congress. Unfortunately, the country is a mess, and the prospects for a complete turnaround aren’t great. But we’ll take today to bring us up to date on where they are and what they’re doing… It’s an anything goes Monday.

Today, I shared a note from a listener, Patrick in Germany, who shared this note and the following video:

I came across a short audio clip on the radio of Gemany’s Nazi Propaganda minister Joseph Göbbels that struck me. He was the guy behind the mass indoctrination of the German people, and he did it with precise strategic planning.

You are a radio person, you despair every day about the right wing dominance in FM and AM radio in the US today, here is, where they got their playbook from. Radio in 1933 had only been around for 10 years in Germany, and few people owned a radio. The Nazis made sure that the prices dropped from 3 month pay to only 1/3 month pay and thus many Germans could be reached by the Nazi propaganda.

the link should play you two clips back to back, The first short clip (from 0:19 to 1:20) is what I translated for you. Göbbels talked to the 10 heads of Germany’s regional state owned broadcasting organizations, just one day after Hitler became the dictator in 1933. The second long clip is an official speech on the German Rundfunk Ausstellung, the big Radio trade fare in Berlin. I did not find this as interesting.

What I found most remarkable in the first clip is how precise, calm and actually quite likeable he can modulate his voice. He sounds like the best German movie actors at the time. He was only 36 years old at the time and dressed those long serving directors down like naughty boys. Even if you do not understand the language, let me know how the tonality strikes you.

Here is my transcript/translation, of what he told those 10 national radio directors in just one minute:

Radio broadcasting will be cleansed, just as all of the (?)… civil service will be cleansed. I would like it best, and for this I would be extraordinarily thankful to you, if you could enforce this cleansing action yourselves. (dramatic pause) But if you will not do this, or if you do not want to do this, then we will do it.

We do not even want to disguise this fact: we own the radio waves! No one else does. And we will recruit radio to perform its duty to our ideology and no other ideas shall be published on this platform. And should we allow another idea to be broadcasted then this will only occur to clarify the difference to our ideology.

To believe that there might be a time in the future, where all the parties from the Social Democratic Party to the National Socialists (Nazis) are equally given the opportunity to propose their so called ideas to the people is childish!

And here’s today’s show on video, for those who like to watch