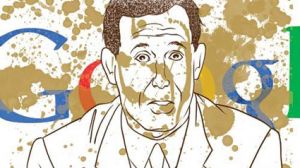 Rick Santorum has a Google problem…. among others.

The Google problem arose from his Neanderthal-brained comments equating homosexuality with “man on dog sex”.  From my layman’s point of view, I feel pretty confident in supposing that his other myriad of problems include sexual repression and insecurity, and religious better-than-you-ism.

I have spent a few minutes wondering what could have caused Frothy to become so twisted.  Then I realized that he graduated from Penn State University.

OK, I know that doesn’t necessarily mean he was molested in the shower by Jerry Sandusky.  But… he did/does have some weird symbiotic relationship with the alleged child abuser/pedophile.  Just do the research (you can forward in 2:05 to the gold)..

But, Frothy Santorum might just surge past Mild Mitt in Michigan today, thanks to Operation Hilarity. And yes, it would be hilarious…

Today on the show, in addition to all that, I was joined by three wonderful guests!