The week actually got off to a good start!  I spent the weekend at a wonderful music festival, and hit the ground running Monday morning with Alan Grayson on the show and feeling good. Then all hell broke loose in Boston. 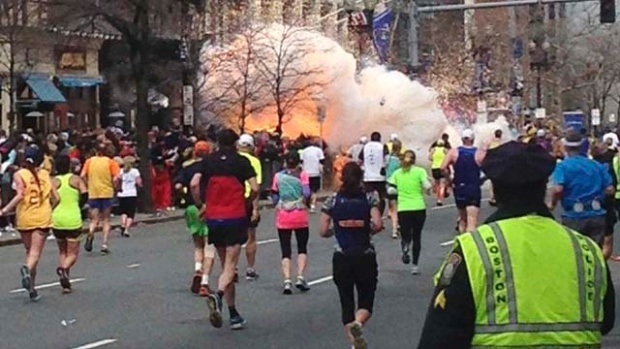 As bad as the actual explosion of two bombs near the finish line of the Boston Marathon was, the lies and insanity that were presented as “news” made it even more disgusting. The worst perpetrator had to be the Rupert Murdoch-owned NY Post, Wall Street Journal and Fox “News” Channel: The “Saudi National” never officially called a “suspect” nor was he arrested, though some “news” organizations sure made it sound that way. And many were quick to take the information they put out to blame “the Muslims”.

The fact that he was even questioned and considered a “person of interest” is also reprehensible.  Read this account of what was done to this young man in this account, “The Saudi Marathon Man” by Amy Davison at The New Yorker.

But the kicker came this morning, in the form of the front page New York’s biggest piece of trash, the NY Post:

As Deadspin reports, those two kids pictured are NOT the suspects!

The pair show up in multiple photos of the finish line. They carry large bags. They are dark-skinned. This was enough for internet sleuths to peg them as suspicious…

(The photo on the paper’s cover is a cropped and zoomed-in version of the one taken by Ben Levine, which appeared on Deadspin on Tuesday.)

But maybe there was a reason for them to be at the marathon, wearing track jackets and carrying bags: they’re runners. The kid in the blue jacket is a middle-distance runner at Revere High School. Last week he ran the two-mile in 11:20.

Yesterday he caught wind that his name and social media profiles were being circulated online, and he did what any teenager would do: He panicked. He made his Facebook timeline private, and in one message now no longer visible, he announced he was going to clear his name.

Going to the court rightnow!! Shit is real. But u will see guys I’m did not do anything

Not to be outdone, CNN decided to get in on the journalistic malpractice action:

After the horrible media malpractice went on for hours yesterday, the FBI finally issued a statement aimed at them!

“Over the past day and a half, there have been a number of press reports based on information from unofficial sources that has been inaccurate. Since these stories often have unintended consequences, we ask the media, particularly at this early stage of the investigation, to exercise caution and attempt to verify information through appropriate official channels before reporting.”

But there was more incredibly bad news yesterday: The massive failure of the US Senate to come together to pass legislation that closes the gun show and internet loopholes on background checks.  Yes, the Republican Party is at fault for voting against anything that doesn’t serve their own misguided ideology, as are the group of so-called Democrats who are too afraid of losing some of that NRA money to vote in favor of background checks – something that 90% of the American people want.  But I also blame Harry Reid for his failure to fix the filibuster, which has been abused by this Republican Party for too long now.  If Reid had actually done something, this sensible background check bill would have passed with a simple majority.

There were actually seven gun amendments that went  down yesterday.  Click here to see what each of them would have done, and how each senator voted.  Then do what Mayors Against Illegal Guns, Mark Glaze, suggests here:

And please read and share Gabrielle Giffords’ op-ed from the New York Times, published after the failure of the senate to pass gun reforms yesterday.

There was more in the news this week that would make any sane person question the sanity of the nation.  At least two letters – one sent to Senator Roger Wicker (R-MS) and one to President Obama – tested positive for the poison ricin.  In the wake of the bad reporting of an arrest in the Boston bombing earlier in the day, I was at first skeptical of reports of an arrest in this case.  But it was confirmed that a Mississippi man named Paul Kevin Curtis had been arrested.

Iif all of that wasn’t enough to make this the worse week ever, late last night came the news of a massive explosion at a fertilizerplant near Waco, TX which, for some reason, was very dangerously close to a residential area.

It looked, as of early Thursday morning, like an industrial accident, though other possibilities were still being investigated. There might be five to fifteen people dead, but that is an estimate, and could change. “It could go up by the minute,” D. L. Wilson, a spokesman for the Texas Department of Public Safety, had said in a press conference in the middle of the night. “We’re in there, searching the area now.” More than a hundred and sixty people have been injured, and sent to many hospitals, including to one that specialized in treating pediatric patients. There is destruction five blocks around the site; a nursing home was evacuated. Wilson said that he had seen what was left of a fifty-unit apartment building nearby—“just a skeleton standing up.” He had also walked around the blast site, which was still smoldering. It was, he said, “just like Iraq. Just like the Murrah Building in Oklahoma City.”

You see, this week in 2013 has been horrific, and today is only Thursday, and it’s only April 18.  I knew I wasn’t alone when thinking back on the events of this week, I also made note of these events from years past:

Amy Davidson noted, given all that I’ve written thus far, the reasons so many of us wondering if there’s more to the explosion in Waco:

There are awful coincidences in the world. Accidents happen in fertilizer plants, and elsewhere. There are days, too, that appear not just unsettled but destabilizing. Poisoned letters, showing a positive test for ricin, sent to the President, following one sent to Senator Wicker of Mississippi. The bomb investigation in Boston was said to yield an arrest—except that there was no arrest: the reports were just wrong. And then there was an arrest, but in the other case, the one with the poison letters. His name is Paul Kevin Curtis; the letters were signed K.C. He may have “performed as an entertainer and Elvis Presley impersonator,” law enforcement sources toldReuters. The letters bump one back in time to 2001 and the anthrax in the mail. The wife of a former justice of the peace was charged with planning to kill two prosecutors in Texas, and in Washington, the gun background-check bill was defeated, while getting a majority of the Senate’s votes. Groups of people in online communities like Reddit spent the day staring at photographs and videos in which the moments before and after the explosions in Boston were frozen, searching the faces in the crowd. The Dallas Morning News ran a photo of a Sonic drive-in with what looked like a modest mushroom cloud behind it. The paper also said that firemen were among the missing.

In Boston, the marathon’s first-aid tents became triage centers; in West, they used high-school football fields. It’s a small town, where people were trying to save each other. Wilson said that his team might have to move quickly. There were real thunderstorms gathering in Texas, and wariness about whether the clouds of smoke from the fire might be noxious, and might be blown the wrong way. “When that north wind changes. we’ll probably have to evacuate to the other side of town.”

With that, dear reader/dear listener, I leave you for the weekend.  Here’s hoping that we make it through the rest of the week unscathed further.  Relax on Saturday.  It’s 4/20 after all.