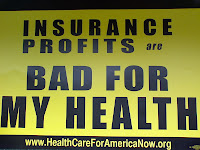 I don’t understand the people in this country who think we don’t need health care reform. Perhaps they lack the compassion gene. How can anyone deny that we have a serious problem in the United States when a family can lose everything simply because one of its members got sick?

Compassion is a theme to which I keep returning, for good reason. Access to quality, affordable health care should be a basic human right, not a privilege for the wealthy. The United States is the only developed nation on the planet that doesn’t take care of its citizens in this most basic and, yes, compassionate way.

In this country where the middle class is quickly dwindling, our health care stem is only helping to accelerate the process. With real unemployment hovering at around 17.3%, more and more Americans are losing their employer-provided insurance policies each day. COBRA is prohibitively expensive but, if you’re lucky enough to have enough money squirreled away to pay the premiums, watch out when the 18 months is up.
< Along with probably millions of other Americans, I’m living the problem right now.

On August 22, 2008, I lost my job. The morning show I hosted on South Florida’s then-progressive talk station was replaced by Imus(!), followed by a full format flip six months later, but that’s a story for another day!. On Sept. 1, I went on COBRA.

COBRA is an acronym for The Consolidated Omnibus Budget Reconciliation Act, which allows workers and their families who lose their jobs, and therefore their benefits, to continue participating in the group plan for up to 18 months, by paying for the full cost of the policy, up to 102%.

With so many Americans losing their jobs during this recession, the American Recovery and Reinvestment Act of 2009 offered some help by way of premium reduction. Eligible people would only have to pay 35% of the COBRA premiums, with the other 65% reimbursed to the employer through a tax credit.

This break originally was to last for nine months, but was later extended to 15.

Unfortunately for me, to be eligible, “the involuntary termination” must have occurred between September 1, 2008 and February 29, 2010. Yes, I was fired on August 22. If only for eight days more…

But that still wouldn’t help me now, as the length of COBRA coverage is only 18 months. My coverage runs out on February 28, 2010.

So, I’ve been shopping around to see what’s available.

My plan doesn’t allow for conversion to an individual plan, so that option is out. There are a number of websites that will allow you to shop for health insurance, so I began looking. At first blush, it seems almost manageable.  But don’t be fooled.

I turned 50 in November. I’m relatively healthy, but I challenge you to find a 50-year old who doesn’t have at least one “pre-existing condition.” You’d certainly have to look beyond me to find one!

I got a representative from United Health Care on the phone to find out what my options were. I answered her litany of questions before getting to the kicker: In the last 10 years, have you had any abnormal physical exam, x-ray, EKG, MRI, CT scan or any adverse or abnormal laboratory or other test results?

I had to disclose that I’ve had two bouts with skin cancer. A malignant melanoma a few years ago, and that pesky squamous cell carcinoma that was removed from my nose just three weeks ago. Bingo.

According to one of the brokers I spoke with, who represents Aetna, Cigna, Humana and a number of other extortionists health insurance companies, in order to be approved, one must be “squamous-free for 10 years!”

So, do I have any recourse? Yes. There are six questions you’re asked to determine if you are eligible for a guaranteed issue “HIPAA” plan.  The Health Insurance Portability and Accountability Act of 1996, in addition to being responsible for all those privacy papers you have to sign at any visit to a doctor, also makes some provisions for continuation of coverage.

If you answer yes to all of the following questions, you’re eligible to buy insurance from the company you’re currently with, with a caveat. Of course, there’s always a caveat. Hold on, it’s coming.

But first, the questions:

Yippee! I answered yes to all six questions! I can get insurance! Oh yeah, the caveat.

If you answered YES to all six questions, your current insurer has to cover you, pre-existing conditions and all, for 10% above the cost of the policy, multiplied by two!  Did you get that?

My insurance extortionist company, United Healthcare, has one plan that they can offer me. It’s their “co-pay select”. They offer it with a choice of at $2500 or $5000 deductible, with 80/20 co-insurance. I asked the woman on the line what that would cost.

She was only able to give me ballpark figures, but here’s what I was able to write down through my anger and tears.

If the health care bill passes as it now looks, I’d be the not-so-proud owner of a “Cadillac Plan!” The definition of a Cadillac plan is one that costs more than $8500 a year for a single person.

And REFORM would tax me on that to boot?

John McCain campaigned on the absurd notion of taxing health care benefits; Barack Obama opposed it. Why then is President Obama pushing it now? Doesn’t he get what he’s doing to middle class working people like me?

I’m getting screwed from both sides, and it’s certainly not fun.

This is not the change I voted for. And if the Democrats and the administration are wondering why the base is turning on them, all they have to do is read my story. I am not alone. There are millions more Americans just like me, fighting to keep their heads above water but getting deeper by the minute. If they don’t fix this bill while they still can, we’re all going to drown.