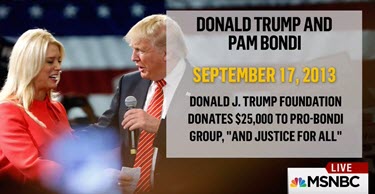 Today on MSNBC, Tamron Hall grilled Donald Trump surrogate A.J. Delgado on Trump’s taxes and immigration lies and flip-flops, or as the mainstream media calls them, “pivots.” She also questioned her about Florida Attorney General Pam Bondi who decided not to open an investigation into Trump University after receiving a $25,000 Trump Foundation donation. Imagine that.

Delgado even let it drop that Trump could legally release those pesky tax returns. Watch:

Trump in 2014, while he was under audit at the time: “If I decide to run for office, I’ll produce my tax returns, absolutely. And I would love to do that.”

Trump’s surrogate today, after being pressed by Tamron Hall: “He legally can…” 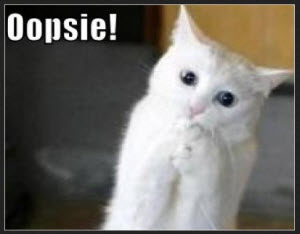 But she kept on keeping on with bogus talking points and later said, “Why is it you want them released?”

Well, A.J., because as Hall pointed out, we don’t know where he’s invested his money. For example, it’s been reported that he has ties to Chinese banks and investments in Russia. 62% of Americans agree that it would be just swell to know exactly what Trump is hiding from them.

And as former IRS commissioner Fred Goldberg said, Trump has absolutely no excuse to not release his tax returns. None. And there are other options he could choose from, as you can read about at the link.

“Trump needs to change up his game and find a way to appeal to a lot more voters pretty quickly, or, even with all her weaknesses

[Hillary Clinton’s] got him on the run. These are not good numbers…

I just have no faith that there would be any meaningful progress with Trump, because he’s massively unqualified by either knowledge or temperament for the job.“

Just over 60 days until the general election and Donald Trump remains the underdog. Can he step it up fast? Mike Murphy of the “Radio Free GOP” podcast joins NBC’s Andrea Mitchell to explain the possibilities.

He’s all yours, GOP. You’ve got yourself quite a candidate there.