The Role of Hate Speak 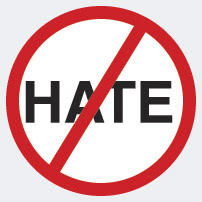 Those of us on the left aren’t the only ones who immediately thought of Sarah Palin’s crosshairs map and Sharron Angles’ “Second Amendment remedies” when we heard that Congresswoman Gabrielle Giffords was shot. The right wing immediately went into defensive mode.

Did you notice that the first time we heard Sheriff Dupnik speak on Saturday, he called out professional incendiary talkers:

“People tend to poo-poo this business about all the vitriol that we hear inflaming the American public by people who make a living off of doing that. That may be free speech, but it’s not without consequences.”

You’ll notice that, not once on the day of the shooting, did Sheriff Dupnik ever single out which people he was talking about or on what side of the political divide they stand. Everyone knows, because that type of violent rhetoric, gun imagery and murderous metaphors tend to come, almost exclusively, from the right.

As they say, if the shoe fits…

Of course, the pushback has been strong. Just this morning, I was asked to be a guest on a right wingers’ radio show down here in South Florida. I knew it was a mistake before I went on, but I believe that if we’re ever going to get beyond this, we have to talk it through.  Of course, the host – Steve Kane – tried to make it about me, then began spewing hateful lies and attacks (Barney Frank ran a “whorehouse.” ) I finally just hung up.

All I’d like to hear from one of them is that it’s time to end the violent calls to action and the hateful rhetoric.  I haven’t heard it yet.

Today on the show, I’ll be joined by Mark Potok, director of the Intelligence Project at the Southern Poverty Law Center.  I think he’ll tell us that the shooter wasn’t part of any organized group, wasn’t particularly political, wasn’t acting out a hate crime… but is a mentally ill young man.  That doesn’t negate the fact that the hate speak must stop!

I’ll also be joined by Howie Klein of Down With Tyranny, who yesterday posted lots of examples of the types of incendiary rhetoric that could easily lead someone with a mental illness to act in a similar fashion.

My friend, who blogs as GottaLaff at The Political Carnival joins me every Tuesday morning to dish on the news. She’s pulled together lots of stories surrounding the shootings in Tucson that we’ll talk about today:

2008: Sarah Palin blamed by the US Secret Service over death threats against Barack Obama

UPDATED- Congresswoman Gabrielle Giffords SHOT In Arizona, along with others. MSNBC: Expected to pull through. Federal judge killed.

Jared Loughner was a registered independent, didn’t vote in 2010 election

Jared Loughner’s college professor not surprised he was charged with murders.

“The hard left is going to try and silence the Tea Party movement by blaming us for this.”