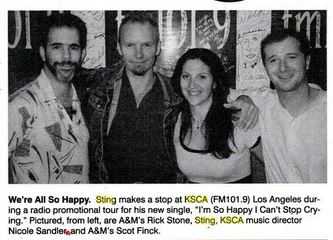 I still remember the day in 1978 when I received Outlandos d’Amour, the first album from a new band called The Police. I was in college at the University of South Florida working at WUSF, the 100,000 watt NPR station that sat in the basement of the student services building, where I hosted the only four hours of rock and roll on the station that played classical music all day and jazz at night. I was relegated to Friday and Saturday nights from 11pm-1am. But it was where I learned my trade.

As Rock Music Director, I also got record service. I remember opening the box from A&M Records and scoffing at the band’s name. But when I put it on the turntable, I realized that there was something special there.

By 1996, Sting had long gone solo. He had just released his fifth solo album, Mercury Falling. I was working at fm 101.9, which was pretty much the only station in Los Angeles that would play a new Sting record right out of the box. We asked if he’d join us for a session in the KSCA Music Hall. It apparently took a bit of convincing on the part of the label as he hadn’t done a radio interview like we were requesting in many years.

But he agreed and I got a great interview. He was so happy with how it came off that he actually hired our audio engineer, Pat Dorn, to accompany him to a select few other radio stations…

In 1999, Sting released his next solo outing, Brand New Day. KSCA was sold in 1997 and changed format to Spanish language music. But in 1998, Channel 103.1 hit the airwaves to fill the void.  Once again, I got to host Sting when he visited “Studio C”. In addition to the interview, we wanted to do a fun promotion with him. I had the idea of having Sting lead a yoga class for our listeners.

It turned out to be such a great idea that A&M turned it into a national promotion and flew in contest winners from radio stations all over the country to take a yoga class with Sting. In the end, we only got to bring two pairs of winners… but I got to participate, and have an amazing memory of that day. 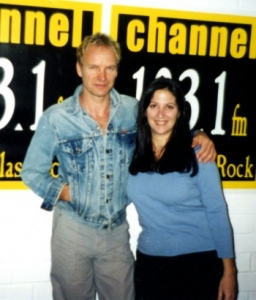