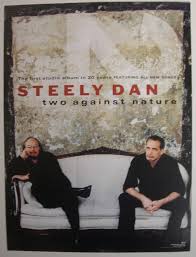 Twenty years after their seventh studio album, Steely Dan reconvened at Riversound Studios in New York City to record would would become their eighth, Two Against Nature.  In advance of its release at the end of February 2000, I was hired to travel to NYC to interview Walter Becker and Donald Fagen for the world premiere radio broadcast, to be produced by Mark Felsot at SFX.

I had to pinch myself throughout the day. It was February 8, 2000. I can still picture the setting quite clearly. Sadly, I can’t share that picture with you as we didn’t seem to take any pictures! But Donald and Walter were every bit as witty and sharp as I expected, and then some. Two Against Nature went on to win four Grammys, including Album of the Year!

Here is the finished project as it aired on stations all over the country.

And for those who want the really deep dive, this is the raw interview audio, just as it happened: