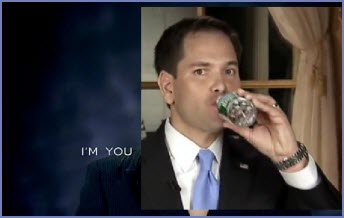 This video is going unnoticed, at least that’s my perception. So of course, I feel compelled to share it with you. It was taken on a visit to Tampa shortly before Marco Rubio dropped out of the presidential race. It’s just so darned inconvenient that someone would ask him a, you know, question of substance.

A liberal activist who caught up with Rubio in the waning days of his presidential campaign in Florida posted this video of her asking him about the Equal Rights Amendment.

“As president, are you going to support the Equal Rights Amendment for women?”

“That’s so outdated, we don’t need that anymore…I haven’t even heard about that in years.”

Again, via Marc Caputo at Politico:

Sen. Marco Rubio is ahead of Democratic Rep. Patrick Murphy by 2 points in the U.S. Senate race…

I’m no fan of Murphy, but I’d like nothing more than to see Rubio defeated once and for all so that I can say, “He’s so outdated. I haven’t even heard about him in years.”