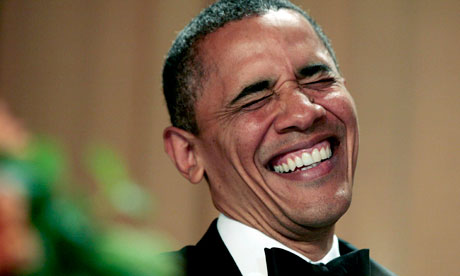 Perhaps it’s the fact that today is the last day in April that got me a bit feisty today, or it was the fact that John Fugelsang and GottaLaff were my guests this morning, or that the president’s press conference was so easy to heckle – or a combination of all of the above.

I guess my potty-mouthed mocking this morning began with the reading of the now-infamous sorority sister’s profanity-filled missive, and then listening to this spoof of it.

But when President Obama responded to a question during the press conference about the Guantanamo detainees on hunger strikes, I got angry.  He’s the President of the Fucking United States.  If he really wanted to closed the damned thing, he’d close it.

I flashed back to something I heard while half-asleep last night, about then-President Lyndon Johnson whipping out his dick – because he could.  I googled it, and found that apparently he did it fairly often.  The word is that LBJ was very well endowed and was quite proud of it.  Which led me to wonder if Obama had any balls.

(By the way, we’ll be dealing with the subject of Gitmo in a big way on Thursday morning when Jason Leopold joins me!)

Tomorrow on the show, Jim Graves, the man who we hope will unseat Michele Bachmann in 2014.