President Obama: Weigh in on #OWS and our Burgeoning Police State

When even Shepard Fairey, the creator of the 2008 Obama “Hope” poster weighs in to hold President Obama accountable, you know we’re on to something.  This morning, White House Press Secretary Jay Carney said the U.S. is deeply concerned about the violence and is calling for restraint on all sides. He says despite the clashes between security forces and protesters, Egypt must proceed with a timely transition to democracy.

However, searches for any White House comments on the spate of violence from police departments around the country on peaceful, non-violent protesters turned up not a single statement.

It’s time for the president to weigh in on the actions turning the US into a police state. 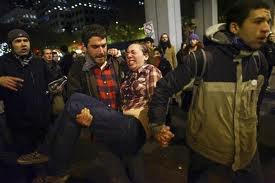 On November 15, we were introduced to 84-year old Dorli Rainey after she was pepper sprayed by Seattle police for daring to be standing with the Occupy Seattle protesters.  We also heard that a pregnant woman was among the other victims of the spraying rampage of the power-drunk cops.  Today, we learned that 19-year old Jennifer Fox is no longer pregnant.  She suffered a miscarriage on Nov. 20th, five days after being abused by Seattle’s finest.

“I was standing in the middle of the crowd when the police started moving in,” she says. “I was screaming, ‘I am pregnant, I am pregnant. Let me through. I am trying to get out.'” At that point, Fox continues, a Seattle police officer lifted his foot and it hit her in the stomach, and another officer pushed his bicycle into the crowd, again hitting Fox in the stomach. “Right before I turned, both cops lifted their pepper spray and sprayed me. My eyes puffed up and my eyes swelled shut,” she says.

Fox asked for medical attention—the now-famous photo by Josh Trujillo of her being carried to the ambulance is here (click to the second photo)—and was rushed to Harborview Medical Center, she says, where doctors performed an ultrasound and said that they “didn’t see anything wrong with the baby at the time.” Fox says she had also seen a physician at Harborview for prenatal care about five week before.

“Everything was going okay until yesterday, when I started getting sick, cramps started, and I felt like I was going to pass out,” Fox says.

A friend called for an ambulance near the community college campus. (Fox says she has been camping with Occupy Seattle since it first began in Westlake Park. She is homeless and says, “I don’t have a place. This is the place I call home.”) When she arrived at Harborview at 11:00 a.m., she says, a doctor told her that “there was no heartbeat” from the baby. “They diagnosed that I was having a miscarriage. They said the damage was from the kick and that the pepper spray got to it

Sickened yet?  If not, just check out some of the comments after that story.  Of course, Jennifer Fox is being blamed for the miscarriage: “It was totally irresposible of this woman to put her unborn baby at risk in this way.”

And then there’s the ongoing saga at UC Davis, where Chancellor Linda Katehi apologized to the students for Friday’s horrendous actions by the UC Davis Police.  Unfortunately for the students there, it seemed to be too little too late.

The English Dept of UC Davis is quite ballsy. This is a screen-grab of what you’ll see today if you visit English.UCDavis.edu

To be continued, I’m sure…

Of course, the so-called Super Committee was not so super after all.  They couldn’t agree on how to cut the deficit.  It’s actually quite easy.  Put Americans back to work so we can pay taxes.  Deficit diminished.

Every Tuesday, the second hour of my show features a visit from GottaLaff of The Political Carnival. Today, we talked about these stories and more…

George W. Bush (the new Marcus?) to Michele Bachmann: “Why are you wearing those gloves?”

Poll-itics: “Fox News lead[s] people to be even less informed than those who don’t watch any news at all.”

Police officers in UC Davis pepper spray incident placed on leave, but still, whatever you do, don’t curl up!

Dep’t. of What Took So Long: Rick Perry’s fundraising dries up

GOP Thanksgiving Family Forum VIDEO- Newt Gingrich to #OWS: “Go get a job right after you take a bath.”

Tomorrow, Joshua Hersh live from Cairo, Egypt and Oakland radio’s DaveyD. Plus, 11 years ago, a judge in Almaty, Kazakhstan approved my adoption of my daughter Alison. Happy Adoption Month!