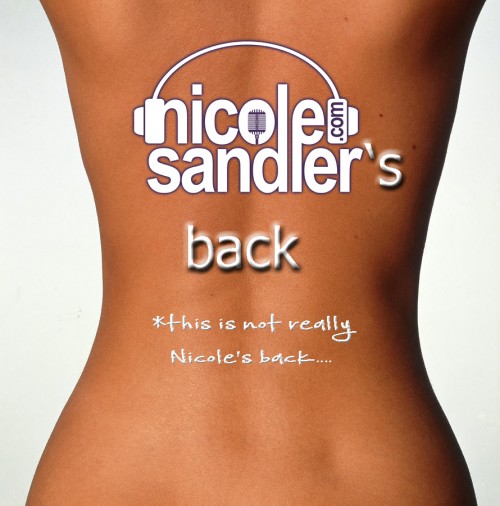 I don’t think my back ever looked like that. I had surgery to remove the cancers growing in my left lung seven weeks ago today. Just five weeks ago, it looked like this: 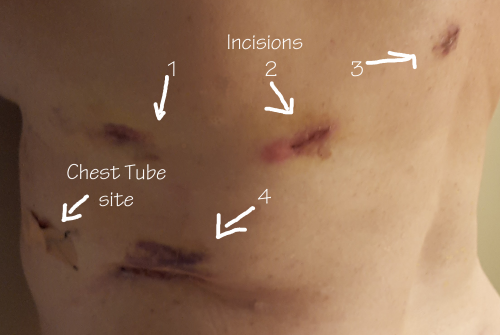 That was a couple of weeks after my surgery to remove the lower lobe of my left lung and take a wedge from the upper lobe, where cancerous tumors made their homes. The numbers are the incisions for the Da Vinci Robotic surgery, as opposed to an open thoracotomy which is akin to torture.

Aside from the site where the chest tube was (which still hurts like a bitch) and some swelling and pain at #4, my incisions are mostly healed. Sadly, I still have pain that manifests as pressure around my rib cage and it becomes more and more difficult to breathe the longer I go without the pain meds. (So take the pain meds, dummy!) And I have nerve pain too which will likely stick around for a while.

But I am incredibly lucky. I could have been walking around with these tumors growing in me for many more years before discovering them. Most people are diagnosed with lung cancer in their 70’s and the cancer is usually Stage 4 by then.

As I recounted in my most recent post on the Fuck Cancer blog, I will not be having chemo. We agonized over the decision but, in the end, went with what we had been told at the start — that if the two tumors were separate and distinct cancers, surgery was all that would be needed. We’ve since learned that they won’t state with 100% certainty that they are separate and distinct, but that’s what they believe. But I will have a CT scan every three months for at least the next two years, and then every six months for the following three years. If I’m still “cancer-free” at that time, then they’ll say that the surgery cured me.

I’ll have a lot more to share on the subject — more about our broken healthcare system and the reprehensible for-profit insurance industry who are illness profiteers and government-sanctioned extortionists.. but you get the idea!

On today’s show, I told the whole sordid tale… how it all began on July 7 as a really shitty day led to heart attack symptoms, and what happened after that. And here we are today.

Tomorrow, it’s back to business as usual. Democratic consultant Mike Lux just signed on as a senior adviser to Donna Brazile, the interim DNC chair. You know I have lots of questions for him… but he’s one of us (read: real progressive) and will hopefully exert a lot of influence there.