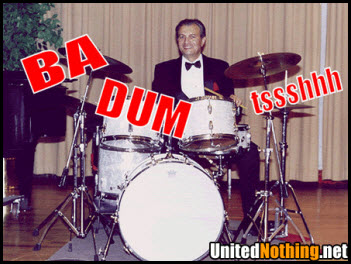 DONALD TRUMP has been named Time magazine’s “Person of the Year.” When he found out, TRUMP said, “That’s all I ever really wanted, I really never wanted this President thing.”

Some past people of the year included STALIN, NIXON, PUTIN and HITLER. So I guess TRUMP fits right in.

Time’s “Person of the Year” is quite an honor, unless you are named in the year when the Zika Virus broke out, the earth was the hottest it’s ever been, MOHAMMAD ALI, PRINCE, and DAVID BOWIE died, Syria exploded, Brexit happened and DONALD TRUMP was elected President. Congratulations DONALD, You are the face of the worst year ever.

Yes, on January 20th DONALD TRUMP will become the new President, but it’s just a stepping stone. His goal is to become God.

Too bad! GEORGE CLOONEY beat him to it.

TRUMP will be getting a Goldendoodle puppy when he takes office. To teach it how to beg and roll over, they brought in MITT ROMNEY.

Vice President-elect MIKE PENCE attended the New York Jets game, where the Jets lost 41-10. PENCE heard so much booing, he thought he was at “Hamilton” again and got up and took a bow.

This week, TRUMP went to North Carolina, Iowa, and Michigan — all states that voted for him — for his “Thank You” tour. When he comes to California he’ll change the name a little. It will become his “F–k You” tour.

I don’t Know if DR. BEN CARSON knows anything about “Housing and Urban Development,” but when he heard TRUMP chose him to be Secretary of HUD he said, “I’m very excited. I always was a big fan of Paul Newman.”

The White House announced a new program to teach computer science to more American school children. If it goes well, for the 2020 presidential election, forget about Russia, we’ll be able to hack our OWN election.

GOV. CHRIS CHRISTIE currently has a 19 percent approval rating in New Jersey. And they are all Pizza shop owners.

On Saturday, the hearse carrying FIDEL CASTRO’S remains broke down and had to be pushed. But that’s what happens when you’re taken to the cemetery in a 1954 Chevy hearse.

The last of the Mercury Seven astronauts, JOHN GLENN, died at 95. When he was 77 years-old, GLENN went on an historic space mission to find out how space travel affects the elderly. They’ve even taken a new motto because of GLENN’S trip: “One Small Step For Man. One Giant Leap for Depends.”

There was no trouble following senior citizen GLENN’S space shuttle. It was the one with the left-turn signal blinking the entire trip.

They did not allow the 77 year-old to participate in the sleep experiments. They couldn’t get his Barcalounger through the Shuttle door.

There is no truth to the rumor that the winds last week in Los Angeles were so strong they actually blew BRAD PITT and ANGELINA JOLIE back together again.