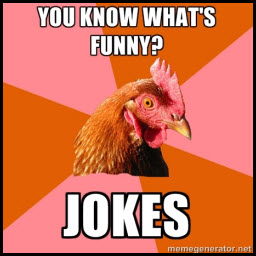 On Nov. 8th it will become official. We will finally know whether the country will have its FIRST WOMAN PRESIDENT or its LAST U.S. PRESIDENT — Here are some observations that have taken us to this historic moment:

2015 will go down as the year in which something that was believed to be extinct suddenly came back to life and wreaked havoc upon us. Not a Jurassic World on our planet, DONALD TRUMP on our country.

TRUMP said that he has made up with FOX NEWS over his controversial comments toward MEGYN KELLY. And if there’s anything TRUMP and FOX NEWS are good at it’s “making things up.”

DONALD TRUMP has called for a ban on all immigration to the United States. That is unless he needs a new wife.

At the first Democratic debate, the candidates were standing on the stage with HILLARY in the center and BERNIE SANDERS on her right, making it the first time in history BERNIE has been to the right of anyone.

According to opinion shapers, HILLARY won the night on substance. If that’s all you need, LANCE ARMSTRONG could walk away with the election tomorrow.

TRUMP said he’d use waterboarding if it was needed to obtain the information we were looking for. Either that or having prisoners watch reruns of “The Celebrity Apprentice.” Which ever did the job.

If TRUMP is elected, SARAH PALIN and NEWT GINGRICH will probably be part of his administration. Which means, the West Wing goes directly to the RIGHT wing.

DONALD TRUMP says that if he is President, he will punish women who have abortions, although he doesn’t yet know what that punishment would be. I say DONALD TRUMP being President is punishment enough.

The President of Mexico hosted DONALD TRUMP. It was just another example of a Mexican doing a job that Americans don’t want to do.

As soon as TRUMP crossed into Mexico, even HILLARY CLINTON said, “OK, let’s get going on that wall.”

DONALD TRUMP claimed that JUDGE GONZALO CURIEL’S Mexican heritage makes him unfit to preside over a lawsuit against “Trump University.” TRUMP’S remarks about the Hispanic judge was a “textbook” definition of racism. TRUMP’S supporters were not fazed. They’ve never seen a textbook.

Not only does TRUMP have to reach out to the Hispanic voter, he’s also reaching out to the black community. TRUMP said. “I love African-Americans. Why, I have every record AL JOLSON ever made.”

TRUMP told supporters he is going to take care of African-Americans. I don’t think he should have added, “Once and for all.”

A TRUMP Presidency is getting so real, Mexico is starting to think a wall is a pretty good idea.

Hillary responded to her status as the nominee, calling it a “historic, unprecedented moment.” She looked so radiant making the speech, BILL forgot himself and hit on her.

TRUMP is being accused of being too vague so his campaign team immediately said they would start being more specific. When asked, when? they said, “Soon-ish.”

DONALD TRUMP was caught on tape telling BILLY BUSH how he tried to have sex with “Entertainment Tonight” reporter NANCY O’DELL. He says he took her furniture shopping. She was looking for a dining room table. He was looking for an occasional piece in the living room.

TRUMP said, “the election is absolutely rigged by a dishonest and distorted media.” HILLARY brought up how TRUMP said even the “Emmys” were rigged because “Celebrity Apprentice” never won one. So it looks like EMMY is the only woman TRUMP hasn’t grabbed.

TRUMP is hoping these sexist and racist scandals will blow over. He doesn’t want his name dragged through the mud. He’ll need every bit of that mud for the final week of the Presidential campaign.