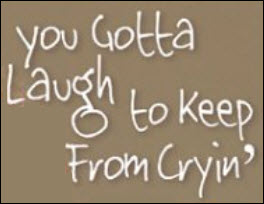 Last week “TRUMP vs. CLINTON 3,” was held in Las Vegas. More than 71 million people watched and screamed at their TV sets. It proved one thing. We should have watched the baseball game.

At the debate TRUMP fended off attack after attack. He was like a woman meeting DONALD TRUMP.

TRUMP’S devoted wife MELANIA gave an interview to ANDERSON COOPER where she stands by her husband. Well, actually she stands behind him. otherwise he’ll try to grab her you-know-what.

TRUMP said, “the election is absolutely rigged by a dishonest and distorted media.” Even at polling places, the election is being rigged against him. Well, Nov. 8th, millions of “riggers” will be behind curtains in private booths, and with a secret ballot COLLUDE to defeat TRUMP.

And they’ll be wearing stickers that says, “I’m a rigger.” Or, to be politically correct, “I’m a regro.”

HILLARY brought up how TRUMP said even the “Emmys” were rigged because “Celebrity Apprentice” never won one. So it looks like EMMY is the only woman TRUMP hasn’t grabbed.

TRUMP said during the debate, when he was talking about immigration, that we have some “bad hombres” here. Bad hombres? First MELANIA TRUMP steals lines from MICHELLE OBAMA, now TRUMP is stealing lines from CLINT EASTWOOD.

According to his polls, TRUMP said he won the debate. According to the network polls he lost. It seems, everyone has a different poll they go by. We decided to conduct our own. HILLARY CLINTON is winning the election according to our informal poll conducted at “7-Eleven.” However, the findings are being hotly contested by analysts from “The Cheesecake Factory.”

It’s Halloween time and according to statistics 74 percent of Americans plan to hand out candy. At the Playboy Mansion, HUGH HEFNER will be handing out not only Candy but MANDY and SANDY and won’t that be dandy.

Yes, it’s that time of the year when once again we celebrate the scariest most frightening holiday. Usually it’s Halloween, but this year it’s Election Day.

A very funny writer, TOM FINNIGAN, suggests, “Maybe AL FRANKEN should run for President and JILL STEIN for VP as Independents. A “Franken-Stein” ticket couldn’t be any scarier than the monsters we have now.

It’s also World Series time which means the baseball season is almost over. For those of you who are addicted to the game and will miss seeing it on TV, here are some things to do until spring training rolls around:

–Hire VIN SCULLY, he’s not busy, to do a play-by-play account of your wife making a meat loaf.

–Pay your next door neighbor to stand in front of your TV set, chew bubble gum, spit and scratch his crotch. That way you’ll keep the ambiance going.

Everyday we hear about the release of a couple of thousand e-mails from Wikileaks. On every news channel it’s Wikileaks — Wikileaks. Pretty soon we’ll have so many Wikileaks we’ll need Wikidepends.