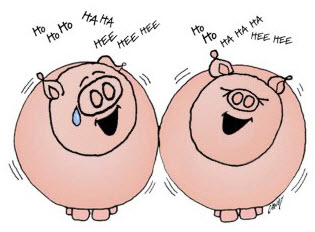 The new GOP Senate healthcare bill was unveiled this week with deep cuts in Medicaid. Over 20 million people would once again have to go without health insurance. They’d have to go back to finding a doctor they could afford. A doctor who, on his wall would have a “Man Of The Year” award — from Forest Lawn.

A doctor who’s medical diploma is signed by MARCUS WELBY.

One who’s M.D. on his diploma stands for “Many Disasters.”

A doctor who sells Mrs. Fields Cookies in the waiting room.

A hospital that shares space with a taxidermist, so either way your family gets Grandpa back.

The bill also defunded “Planned Parenthood.” Women will have to get their mammograms at “Hooters.”

The bill includes a big tax cut for rich people. So unless you just got drafted by an NBA team, it’s not great news.

One of the President’s lawyers claimed that TRUMP is not under investigation, even though TRUMP tweeted “I am being investigated.” This can’t be easy for TRUMP’S lawyers. They said, “we’re representing someone who lies even more than we do, and lying is OUR job.”

There was a special election in Georgia and three other states and the Republicans won all four, which experts say, shows that Americans may not be as dissatisfied with TRUMP as much as MELANIA is.

A new study just came out and it found that after a few months of DONALD TRUMP, most Americans now have a favorable view of President GEORGE W. BUSH. When reached for comment, the ghost of RICHARD NIXON said, “I’m next, baby.”

The White House is reportedly taking SEAN SPICER off giving press briefings and he is leading the search for his own replacement. TRUMP would help, but he’s busy searching for HIS OWN replacement.

When asked where he’s going, all they told SPICER was, “it’s on a big farm upstate where you can run and play with all the other press secretaries.”

A heat wave has hit the Southland. It was so hot in Las Vegas, the forecast was a record 117. Also that’s the average age of people at the nickel slots.

Temperatures are expected to reach 127 degrees in Death Valley. But, it’s a dry death.

President TRUMP’S son-in-law, JARED KUSHNER, is in the Middle East to broker a historic peace between Israel and the Palestinians. Experts expect real progress to begin as soon as both sides stop laughing.

The big day finally arrived. BEYONCE gave birth to twins. The birth was premature and all along we thought the babies would stay inside much longer. During the last ultrasound, the baby girl was heard to say, “Why would I leave this place. It’s nice and warm, there’s plenty to eat and it’s a great place to meet guys.”

Wednesday, June 21st, was the longest day of the year. That is if you don’t count the “Country Music Awards Show.”