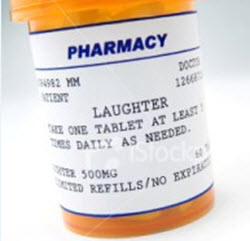 In a suprise move, PRESIDENT TRUMP fired FBI Director JAMES COMEY. The White House is saying COMEY was fired for his handling of the HILLARY CLINTON email investigation. Other people are saying he’s being fired because of the Russia investigation. I say he was fired because TRUMP still hasn’t forgiven COMEY for making him President.

COMEY was in Los Angeles and found out that he was fired when he saw it on television . Which means TRUMP fired the head of the FBI the same way he fired GARY BUSEY — on TV.

Insiders are hoping TRUMP will appoint a woman to replace FBI Director COMEY. After all, there hasn’t been a decent dress in the Director’s office since J. EDGAR HOOVER.

COMEY got a letter from PRESIDENT TRUMP informing him that his services were no longer needed. After hearing this, MELANIA said, “How do I get one of those letters?”

France elected centrist candidate, EMMANUEL MACRON to be its new President despite having his campaign hacked. Or as VLADIMIR PUTIN put it, “You help WIN some, you help LOSE some.”

It’s been reported that KIM JONG UN, last week ranted a series of insults at BARACK OBAMA and HILLARY CLINTON. Well, it looks like “Fox News” finally found its replacement for BILL O’REILLY.

A Toyota Land Cruiser set the record as the world’s fastest SUV after reaching 230 mph. Just what the average mother needs if she’s really late taking her kid to soccer practice.

This past Sunday was “Mother’s Day.” A time to honor the mothers of America. Ahhh, my mom, no matter how successful I became, every week wherever I was, I’d send her a package — She’d wash it, iron it and send it right back to me.

On Mother’s Day, moms eat free at “HOOTERS.” How nice, sons eating lunch with their mothers at “HOOTERS.” Some guys never get tired of hearing their moms saying, “Look at me when I’m talking to you!”

GOOD NEWS: The Writer’s Guild was able to settle a new contract without going on strike, even though there are dozens of “Reality Shows” that are still not guild covered. In fact, there are so many, if you want to hear fiction on television you’re just going to have to watch PRESIDENT TRUMP’S news interviews.