Listen to this episode: {play}http://traffic.libsyn.com/radioornot/20120912_Nicole_Sandler_Show_-_Romney_Unfit_to_Lead.mp3 {/play} 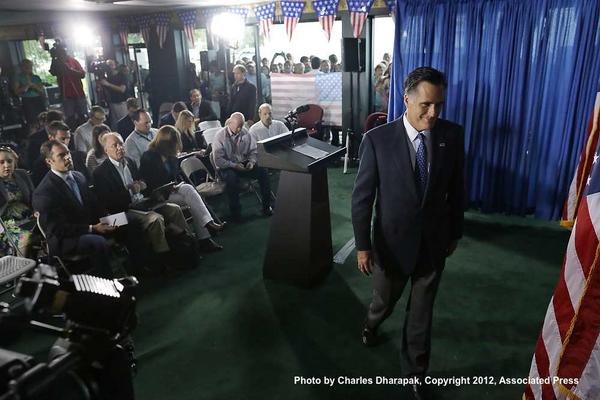 The photo above shows a smirking Mitt Romney leaving the podium after doubling down on his inappropriate and offensive statements saying that President Obama wanted to “apologize” for American values as protests against an anti-Islam film turned violent in Egypt and Libya.

That is so wrong on so many levels I don’t even know where to begin. So we’ll start at the beginning.

Yesterday-Tuesday September 11- according to this article in The Atlantic, tensions began flaring in Egypt about a little-seen film, apparently produced by an Israeli-American, promoted by the despicable Koran burner Terry Jones.  Inflamed by Egyptian media who had gotten hold of some clips, the blasphemy of it all sent these people (who’ve been known to bat shit crazy over cartoons they find offensive), protesters began gathering at the US embassy in Cairo in numbers estimated at around 2000.

The US Embassy in Cairo, acting to defuse a volatile situation, issued this statement:

The Embassy of the United States in Cairo condemns the continuing efforts by misguided individuals to hurt the religious feelings of Muslims — as we condemn efforts to offend believers of all religions. Today, the 11th anniversary of the September 11, 2001 terrorist attacks on the United States, Americans are honoring our patriots and those who serve our nation as the fitting response to the enemies of democracy. Respect for religious beliefs is a cornerstone of American democracy. We firmly reject the actions by those who abuse the universal right of free speech to hurt the religious beliefs of others.

That statement from the Embassy was issued hours before any acts of violence occurred in Libya, and long before the consulate there was attacked.  But that didn’t stop Mitt Romney’s spokesperson from a political attack… while we were still under attack!

By the way, for the timetable of what happened when, we turn to the Wall Street Journal.

That statement was initially embargoed until after midnight, ostensibly so as to not be issued on 9/11, but the embargo was lifted just moments later, at 10:24pm.  Said the statement:

Note that the details about who and how many were killed were still not known. But not having any of the facts didn’t stop Romney from waging a political attack.

Reasonable minds might give Mr. Romney the benefit of the doubt, conceding that he thought the statement (from the Embassy, not the administration) had come after the attacks, but Romney doubled down on his criticism of President Obama in a press conference this morning from Jacksonville, FL.  Another interesting fact to note is this man’s lack of protocol, as he stepped in to make his statement before the President’s scheduled remarks at 10:35 this morning.

Poor Mitt can’t take the heat.  He was obviously reacting to the multitudes of criticism he’d received since his ill-advised statement some 12 years hours earlier, he got all defensive (as he tends to do), and lashed out at President Obama again:

“…I also believe the Administration was wrong to stand by a statement sympathizing with those who had breached our embassy in Egypt instead of condemning their actions.  It’s never too early for the United States Government to condemn attacks on Americans, and to defend our values.  The White House distanced itself last night from the statement, saying it wasn’t ‘cleared by Washington.’ That reflects the mixed signals they’re sending to the world…”

As they say, give ’em enough rope. Keep talking Mitt…

Most of the Republican party steered clear of political smears, but not all.  Mitt was joined in his asshattery by RNC chairman Reince Preibus who tweeted “Obama sympathizes with attackers in Egypt. Sad and pathetic.”

Apparently President Obama can’t see Egypt and Libya from his house. On the anniversary of the worst terrorist attacks ever perpetrated on America, our embassy in Cairo and our consulate in Benghazi were attacked by violent Islamic mobs. In Cairo, they scaled the walls of our embassy, destroyed our flag, and replaced it with a black Islamic banner. In Benghazi, the armed gunmen set fire to our consulate and killed an American staff member. The Islamic radicals claim that these attacks are in protest to some film criticizing Islam. In response to this, the U.S. embassy in Cairo issued a statement that was so outrageous many of us thought it must be a satire. The embassy actually apologized to the violent mob attacking us, and it even went so far as to chastise those who use free speech to “hurt the religious feelings of Muslims.” (Funny, the current administration has no problem hurting the “religious feelings” of Catholics.)

But where is the president’s statement about this? These countries represent his much touted “Arab Spring.” How’s that Arab Spring working out for us now? Have we received an apology yet from our “friends” in the Muslim Brotherhood for the assault on our embassy?

It’s about time our president stood up for America and condemned these Islamic extremists. I realize there must be a lot on his mind these days – what with our economy’s abysmal jobless numbers and Moody’s new warning about yet another downgrade to our nation’s credit rating due to the current administration’s failure to come up with a credible deficit reduction plan. And, of course, he has a busy schedule – with all those rounds of golf, softball interviews with the “Pimp with the Limp,” and fundraising dinners with his corporate cronies. But our nation’s security should be of utmost importance to our Commander-in-chief. America can’t afford any more “leading from behind” in such a dangerous world. We already know that President Obama likes to “speak softly” to our enemies. If he doesn’t have a “big stick” to carry, maybe it’s time for him to grow one.

And we can never forget the mental midget that is Allen West, who just doesn’t know when to shut up…

“Americans need to question whether the deaths of these innocent patriots could have been avoided. The Obama Administration touted the Arab Spring as an awakening of freedom, which we now see is a nightmare of Islamism.

Even more concerning, is the initial response to these attacks last night from the embassy officials of the Obama Administration was to apologize for a Facebook video that supposedly hurt Muslim feelings.  President Obama’s policy of appeasement towards the Islamic world has manifested itself into a specter of unconscionable hatred.

How anyone can believe this President is strong on national security and foreign policy is beyond my comprehension.  President Obama has clearly surpassed former President Jimmy Carter and his actions during the Iranian Embassy crisis as the weakest and most ineffective person to ever occupy the White House.”

I was also thrilled to welcome Joan Walsh to the program to talk about her new book, What’s the Matter With White People: Why we long for a gold age that never was.

And Susan Smith, president of the Florida Democratic Progressive Caucus joined in to talk about her experience at the DNC convention, the issues facing Florida and the rest of the nation, especially dealing with education.

Tomorrow, we’ll talk with investigative journalist Greg Palast about his new book, Billionaires & Ballot Bandits: How to Steal an Election in 9 Easy Steps, and comedian/actress Maysoon Zayid will help us wrap up the week.