So there I was doing my usual Twitter thing, when I looked up to see a tweet to me from the Associated Press asking me to email them.

It turns out– imagine my surprise– the Rachel Maddow Show recommended me to the AP, who subsequently interviewed me (the designated liberal), as well as a conservative man–a (gulp!) Cruz supporter– about which media sources we rely on for our information. Yes, I was nervous.

Then they wanted to put us together on a conference call. Yes, I was even more nervous.

I resisted because head-to-head, confrontational, left vs right political “debates” aren’t my thing as a rule. I avoid them whenever possible, but AP Guy (his name is Dave Bauder) insisted my counterpart was a nice, retired guy from Indiana, and hey, it would simply be two nice people having a conversation, finding common ground.

Imagine My Surprise number two: That’s exactly what happened! We had obvious differences, but we did find things to agree on. And of all things, Conservative Guy actually emailed me a thank you! I even tweeted about it …and wow, did Rachel’s retweets get a lot of attention: 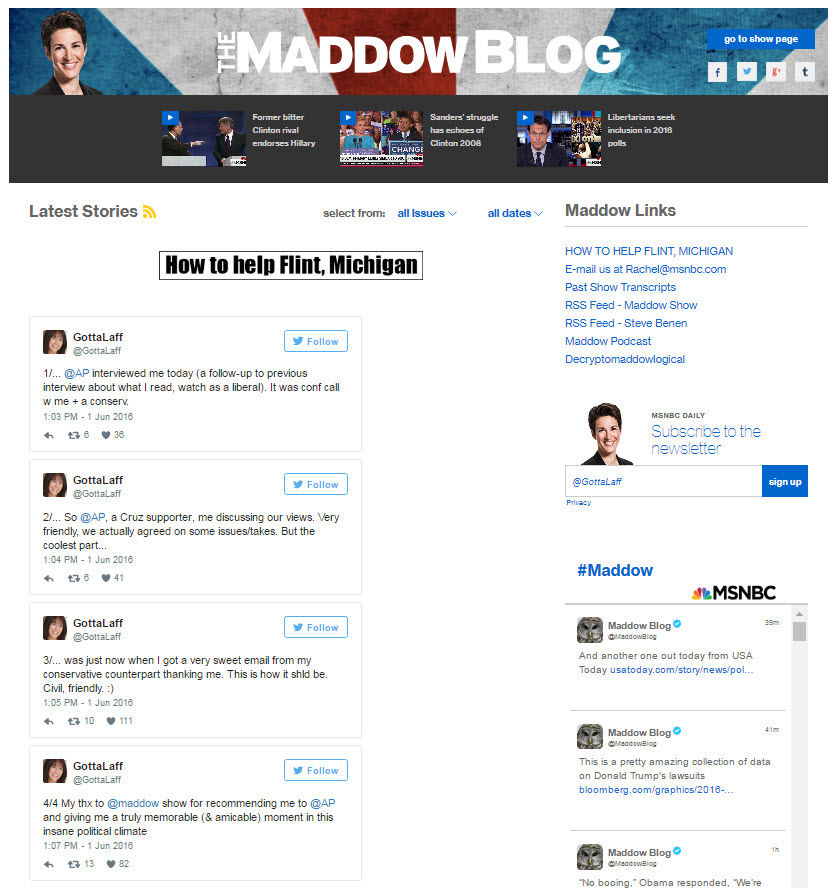 Imagine My Surprise number three! I couldn’t believe the Maddow Blog posted those all over their site, monopolizing the entire front page! *faints*

Imagine My Surprise number four when a few days later, the AP sent out a photographer to take my picture for this thing! *dies* And yes, I was nervous… again. I need to work on that.

The photographer expressed some surprise at the depth and length of the finished product. He expected a minor, 200-word report and told me that, instead, it turned out to be one of the ‘uuuuugest (posted as their “Big Story”).  That was right after he realized his strobe light wasn’t working, which was right after he decided to snap the first set of photos in the messiest room in our house, my office, the only room we haven’t renovated. We knew he’d never use an ill-lit, cluttered cave as a backdrop, so why tidy up, right? Crap. Eventually, he took a second set in the living room. Much better.

I’ve been interviewed by major outlets before, but only about theatrical productions I’d directed, and minor inaccuracies in those circumstances weren’t a major concern. I was terrified that an article about politics, one carried by the biggest news organization in the world, would backfire badly if I were to be misquoted or mischaracterized. That didn’t happen. 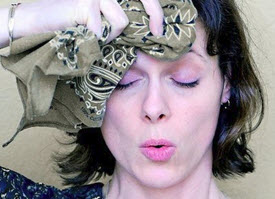 But I feel like I want to clarify a couple of minor points that were slightly out of context. After two hours of being interviewed, only a fraction of what we said was actually used, so please allow me to do a little fine tuning:

I’m an enthusiastic Bernie Sanders supporter. I was quoted as saying I’m not sure whether or not I’d vote for Hillary Clinton in November. The blank that needs to be filled in: True, I’ve never been a Hillary fan, but there is no way I would aid and abet a Trump victory. California is a very blue state. If I feel she’s winning by a landslide here– and I’ll be watching the polls closely– then I may not feel the need to vote for her, but will of course vote down ballot. I haven’t decided if I’m even comfortable doing that, but I have months to think about it. So yes, he was accurate but there were extenuating circumstances.

Also, I mentioned about 15 news outlets that I rely on, ranging from the Washington Post to the Los Angeles and New York Times to The Intercept to Mother Jones to The Nation to random links that send me to all kinds of right-leaning, centrist, and left-leaning sites, blogs, etc. I get breaking news alerts on my phone from all major news organizations (Breaking News app, AP, Fox, Reuters, The Guardian, New York Times, L.A. Times, and many more). Only a couple were referenced. Our own site, Radio Or Not, wasn’t even mentioned. So there’s that.

I also made a big deal about how corporate and commercialized the mainstream media have become, and how news for profit is not real news, but infotainment. Not a word about that, of course. There may have been a couple of more minor points that were omitted, but overall I have no complaints. AP Dave was a doll, he was fair, friendly, and patient. I just wanted to fill you in on what was cut and what I hoped might appear in the piece.

Finally, you’ll notice no reference to the name GottaLaff. In order to participate, the AP insisted I use my real name, so I did. Reluctantly. I’m more nervous about that than anything.

I will continue to use my pseudonym online and hope others do too, because I do have and have had stalkers and remain ultra cautious and very uneasy about revealing my identity. I could have declined to be interviewed based on my queasiness about this, but I wanted my voice heard, and I wanted to share the story with you.

You can read the entire article here.

“The camaraderie has disappeared in favor of taking sides and outdoing one another. It helps to co-mingle and get to hear people as people. Here Jack and I are talking and we have different viewpoints _ completely different viewpoints on some things and similar on others. And look at that, nobody got murdered.”

ADDED: Now that the post is live, I’m seeing they used none of the photos. And oddly, on the AP’s own site, they posted an edited-down version.

Update: I did find the photos. They’re not easy to spot, which is fine by me.