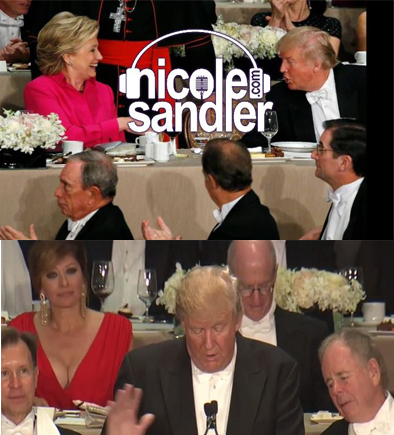 Apologies for the titillating title, so to speak, but if you watched the Al Smith Dinner last night, you couldn’t miss them. Now that that’s out of the way…

Jason Leopold was my guest today on the show. He’s been making me as proud as ever to be his friend as I read and watch his work as an investigative correspondent for Vice News and the new nightly HBO show Vice News Tonight.

Today, we discussed his being labeled a “FOIA Terrorist” by the government because of his expert use of the Freedom of Information Act to access information otherwise unattainable. In fact, it was Jason’s FOIA work – before we even knew about the private server — that led to the release of Hillary Clinton’s emails.

Our conversation about that issue led to a discussion about wikileaks and the ethics of journalists using hacked documents for their reporting. Shortly after the show ended, I came upon this discussion between Glenn Greenwald and Naomi Klein at The Intercept about the same issue. It’s a great dinner conversation topic. Or not.

We also talked about Gitmo, the election and a lot more.

And that brings us to the end of my first week back, albeit on a limited schedule.

Thank you for the kind welcome home. If you can, please remember to donate to support independent, listener-supported media here!