It’s Not the Eye, but the Tongue of Newt that’s the Problem 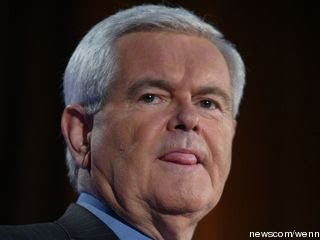 It must be cursed. Poor Newt Gingrich can’t catch a break.  In 1993, he stood with the Republican party in trying to defeat “Hillary Care” and spoke passionately about the need for an individual mandate.  He pretty much echoed those ideas last Sunday on Meet The Press.  Watch for yourself:

What was that you said about the Ryan plan to privatize Medicare Newt?

Newt: “There are things you can do to improve Medicare ”

David Gregory: “But not what Paul Ryan is suggesting, which is completely changing Medicare?”

Newt: “I think that is too big a jump. I think what you want to have is a system where people voluntarily migrate to better outcomes, better solutions, better options, not one where you suddenly impose upon the (unintelligible). I’m against Obamacare which is imposing radical change, and I would be against a conservative imposing radical change.”

But, as the song goes, what a difference a day makes.  Newt’s flunkies were out the very next day saying that what you heard him say is not what he meant to say at all.  And Newt went on the defensive and apologized to the all-powerful Paul Ryan, and went on Greta Van Susteren’s show to eat crow:
Watch the latest video at video.foxnews.com

(In response to the 1993 Meet the Press clip in which he advocated for an individual mandate): “That was a clip from 1993 when, in fact, the conservative position was to have individual insurance in opposition to Hillary-care because she (slurred unintelligible gibberish), so let’s get that out of the way”

In other words… I just said what the party line was then, and that’s not the party line now. So move along.  I must give kudos to Ms. Van Susteren, who actually followed up on that answer, as she seemed as incredulous about his response as I was!

But then Newt continued doing what he does best, digging the hole even deeper:

“I want to set a precedent for a new kind of presidential campaign, and I thank Bill Bennett and Ed Fulner frankly for helping me walk through what people were hearing, which is not what I intended to say. I made a mistake. And I called Paul Ryan today, who is a very close personal friend, and I said that.  Uh, the fact is that I have supported what Ryan’s tried to do in the budget. The fact is that my newsletter strongly praised the budget when he brought it out. And the budget vote is one that I am happy to say I would have voted for, I will defend, and I’d be glad to answer any Democrat who attempts to distort what I said.”

Again, to my surprise, Greta once again asked for clarification!  Was his mistake in choosing the wrong words?   Great was almost saying she couldn’t figure out what he was claiming was the mistake!   So, Newt dug the hole even deeper…

Newt: “Look, I made TWO mistakes.  First of all, if you go back and listen to the question David Gregory asked me, I should have said I’m not gonna answer it. It’s a hypothetical, baloney question that had no hope of happening. The Republicans don’t control the Senate, they don’t have the White House, they can’t do what Obama did, and I should have just dismissed it.”

David Gregory: “What about entitlements? The Medicare trust fund and stories that have come out over the weekend, is now gonna be depleted by 2024 – five years earlier than predicted. Do you think Republicans ought to buck the public opposition and really move forward to completely change Medicare, turn it into a voucher program where you give seniors some premium support so that they can go out and buy private insurance?”

Where’s the hypothetical in that?  That’s exactly what’s on the table right now.  It’s a legitimate question which you could not have chosen to “dismiss” as a serious presidential candidate.  Newt then went on to detail his second mistake…

“The second mistake was some of the words I used.  But I was trying to say something that is really important.  We are at the beginning of a process of solving the entitlement problems of the United States. These are enormous challenges. I believe deeply that the American people have to be an integral part of it. I think that what Paul Ryan has done is he has started that process. He has begun the opportunity – something which President Obama has failed to do – to have an honest conversation, to go to the American people, to share with them his current ideas … and, and he agreed, and he said publicly, obviously things are going to change some, we’re gonna look for improvements, we’re gonna look for  alternatives, we’re gonna try to make sure the country feels comfortable … That is the opposite of what David Gregory asked.

So, I, this afternoon, called Paul cuz I thought it was the only practical thing to do. I am a big fan of his, I’ve spent 33 years of my life trying to help grow and strengthen the House Republican party, I want to make sure that every House Republican is protected from some kind of dishonest Democratic ad, so let me say, on the record, any ad which quotes what I said on Sunday is a falsehood, and it’s cuz I have said publicly those words were inaccurate and unfortunate, and I’m prepared to stand up and – when I make a mistake, and I’m going to on occasion, I’m gonna stand up and share with the American people that was a mistake, because that way we can have an honest conversation.”

I know… I was shaking my head while transcribing it too.  Let’s review, shall we?  Newt makes some statements this past Sunday on Meet the Press that are right in line with the statements he made on MTP in 1993.  His advisors (apparently two guys named Bill Bennett and Ed Fulner) told him that he fucked up.  That was the GOP position the last time Newt held elected office, but not today.  So they “helped him walk through what people were hearing” (ie, what he SAID) and try to position it as something else.

So then he threatens that if any Democratic should dare to use the actual words he spoke, he will go after them because that’s not what he meant to say… and “that way we can have an honest conversation”?  And you wonder why I always refer to the GOP as living in “opposite world”?

On today’s show, in addition to dissecting the above Gingrich dilemma, I also had a few guests.

South Florida Sun Sentinel columnist Stephen Goldstein joined me for a lively discussion about Florida and politics in general.

And I responded to a pitch from a right wing public relations firm who is taking credit for the rise of the Tea Party.  They offered their CEO as a guest, so I bit.  And we learned that the “Tea Party” movement was a product of a massive public relations effort – not the grassroots activism they claimed.  We learned that Randall Terry was a client, the Michigan Militia was a client, the Gun Owners of America is a client and they take clients on an anonymous basis with questionable benefactors…. and a whole lot more.

So if you wonder why an event with tens of people with misspelled signs and tea bags hanging from their hats gets massive news coverage, and hundreds of thousands of people marching on Madison, WI don’t… we might have gotten to the bottom of it this morning.

Tomorrow on the show, NukeFree.org’s Harvey Wasserman on the latest from the nuclear fallout in Japan and what’s at stake here, and comedian John Fugelsang will help us end the week with a laugh or three…  Talk to you then, radio or not!