‘If it rains in London, you guys have to help us’ 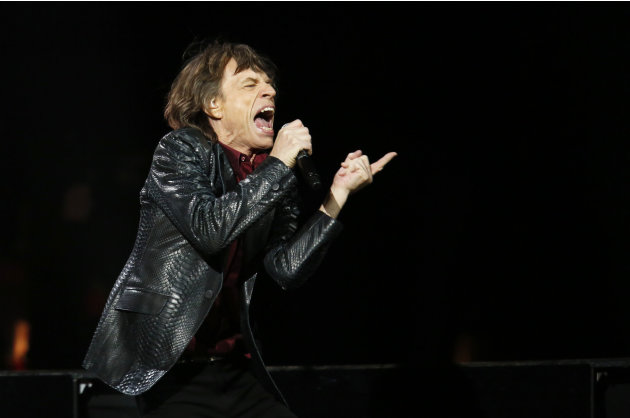 The Rolling Stones are in the NYC area getting ready for their big  50th Anniversary concerts tonight and Saturday Night in neighboring New Jersey. You know, the concert where the tickets will set you back a measly $114.80 for the cheapest seats in the house up to $813 if you want to be seated on the floor.  Seriously, $813 a piece.

And if you’re not near the Prudential Center in NJ, you can watch the Saturday concert via pay per view for a whopping $39.95 or in HD for five bucks more.

Let’s face it, Mick, Keith and Ronnie aren’t hurting for money, they were in town, rehearsed and ready to go, and this was a great commercial for their PPV too – so why the snarky comment from Mick?

In case you missed it, in the middle of their two-song set, Mick made a good observation, “This has got to be the largest collection of old English musicians ever assembled in Madison Square Garden.”  True that!  In addition to the Stones, we got Roger Waters, The Two (the band formerly known as The Who, when Keith Moon and John Entwhistle were still alive, but now made up of the two: Pete Townshend and Roger Daltry),  and Paul McCartney.  All aging white male British rockers.  Odd, perhaps, but then again, this concert was aimed at people who have some money to give, so they went with the old white guys.

But more than a few eyebrows were raised when Mick continued his brief comments with “But I’ve got to say, if it rains in London, you’ve got to come and help us, OK?”

Bruce rocked the place, though I could have done without Bon Jovi. (I know, to each his own….)  And Roger Waters sounded great, Eddie Vedder too!

One last point: Roger Daltry, please keep your shirt on.  Thank you.

Today on the show, I was joined by Eclectablog‘s Chris Savage who pointed out the Breitbart/O’Keefe-style editing on a video in high rotation at Fox showing an altercation allegedly between union activists and Fox’s toll Steven Crowder  in Lansing Michigan earlier this week, as the Republican state legislature rammed through union busting “right to work” legislation.

Howie Klein (Down With Tyranny, Blue America PAC) joined in before leaving for a trip to India to talk about the latest on the fiscal crossroads negotiations, and the unlikely coalition of Dems and Republicans calling for cuts to the military (!) and more..

Plus Maysoon Zayid and her newest admirer Boca Britany joined in too!

Starting Monday, I’m in for Randi Rhodes though the end of the month…  and here too…