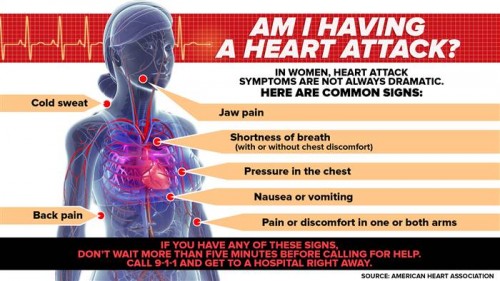 It was one of those days when anything that could go wrong did.  Technical problems at the new studios added to the stress I was already feeling. My show that day was rife with foreshadowing that something bad was going to happen. I believed that my lack of sleep on Wednesday night contributed to my overall lousy feeling that day, but I just pushed it to the back of my mind and got through the day. When I arrived home, all I wanted to do was sleep.

After an hour or two, I awoke, bathed in my own sweat that continued to pour from my my face. And then the pain in my jaw became evident. I tried to ignore the signs and soldier through, telling myself it was nothing. But as my breath was short and I was lightheaded, and I realized the jaw pain was mostly on the left side — all classic signs for WOMEN of a heart attack — David and I decided it was time to go to the hospital.

So, off to Coral Springs Medical Center, part of Broward Health, we went.

They take heart attack symptoms seriously. I was hooked up for an EKG and all my vitals were taken, along with some blood. After a few hours in the Emergency Room, it was determined that they’d keep me overnight. I was seen by the “admitting doctor” Vigarnay Arguello, who seemed oblivious to everything that was going on.