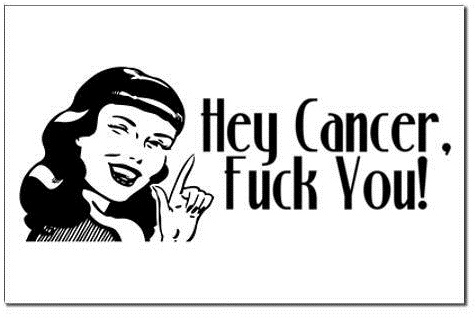 After four weeks (but a veritable lifetime of waiting), we finally met with the oncologist yesterday to go over all of my test results.

After finding out I had a mass on my lung by mistake through an x-ray of my chest after a suspected heart attack (that thankfully wasn’t one), followed by weeks of poking, prodding, CT scan, PET scan, brain MRI, biopsies and other procedures, we got the best news we could have gotten, under the circumstances… with a couple of caveats.

At this point, my cancer appears to be Stage 1 adenocarcinoma, localized in the lower lobe of the left lung. The PET-CT scan showed no signs of lymph node involvement, and the EBUS showed no sign of the cancer having spread to the lymph nodes in my chest.

However, the CT scan did show a second spot on my left lung. This one, much smaller than the main tumor, is in the upper lobe. Unfortunately, they won’t know if it’s cancer until I have surgery to have the lower lobe and the tumor removed.

And the MRI of the brain showed what the doctors believe to be a meningioma.  The oncologist explained that probably 15% of the population has a meningioma, usually a benign tumor that presents no problems and no danger. However, because of my lung cancer, they can’t exclude the possibility that this is related. Unfortunately, the only way to find out is by surgically removing the tumor, which is a major surgery, which we’re not going to do unless absolutely necessary. Instead, I’ll be seeing the neurosurgeon in the next week or so who will most likely want to repeat the MRI in six weeks, and keep a close watch on it.

Despite all of that, I’m very lucky. Usually, by the time adenocarcinoma of the lung is diagnosed, it’s already spread elsewhere making the treatment much more complicated. When it’s caught early, as this appears to be, the recommendation is surgery to remove the cancer. It’s the only time doctors treating cancer even dare to use the word “cure” as it is possible to remove all traces of the cancer and be rid of it. Of course, we won’t know until after the surgery is complete and the lymph nodes that are removed along with the lung tissue are examined and any spreading has been ruled out.

IF we are that lucky, I might not even need chemo or radiation. But one step at a time…

The next step is to find a surgeon I feel comfortable with. Sadly, the surgeon we met with at Holy Cross is not the one.

He explained the surgery he’d do: a 4-5 inch incision, going in through my back. He’d use a rib spreader to open the area and remove the lower lobe of my left lung in one piece. He explained that I’d be in the hospital for about a week, I’d have a drainage tube from my chest and more truly frightening things that I wasn’t happy to hear.

When we asked about some of the surgical advances we’d read about, using scopes or robotic techniques for a minimally invasive surgery, he said that he didn’t do it that way. He explained that doing the main part of the surgery through the small incisions was more time consuming and they’d have to cut me wide open to remove the lung lobe anyway . My research shows that not to be the case, that a minimally invasive removal of the lung lobe is not only possible but done regularly, so we’ve ruled out Holy Cross as the hospital at which I’ll have the surgery.

We have a slew of consults (second, third and fourth opinions) next week, heading up to the University of Florida Cancer Center in Orlando and the Moffitt Cancer Center in Tampa on Wednesday, Cleveland Clinic in Weston on Thursday, and one more surgeon who I was referred to yesterday hopefully at some point next week so we can decide on a surgeon and schedule the surgery.

So, that’s the latest. One foot in front of the other.

In case you missed how this all started, I explained it on my show on July 21. About 90 minutes before hitting the air, my doctor called me with the preliminary results of the biopsy. I shared the information I had just received with my listeners.

As for alternative treatments, I remain very hopeful about the cancer-killing properties in cannabis. On Monday’s show (2pm ET sharp), I’ll be interviewing Rick Simpson, famous for RSO (Rick Simpson Oil). Read his story and get more info at his website: phonenixtears.ca and watch his story, Run From The Cure here:

***Update 8/6 5:40pm  I’ve gotten a few notes from concerned readers who are worried that I’ll forego the surgery to try the cannabis oil. I’m not willing to stake my life on the belief that this is a miracle drug. I will be having the surgery to remove the cancer from my body as soon as possible. But I do think that this oil would be helpful in keeping it from coming back. Sadly, I live in FloriDUH, where it’s still illegal. But we’re working on changing that. Vote YES on Amendment 2 Nov 8.