For once, I didn’t think “Flori-DUH”. Today, I was actually proud of a couple of our elected officials. First, kudos to Senator Bill Nelson (something I never imagined I’d write on this 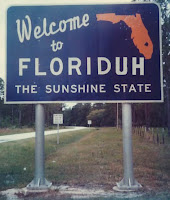 blog!) for being the 41st Senator to state publicly that he’d back the public insurance option as part of a health care bill moved through reconciliation.  He told Huffington Post’s Ryan Grim that today, and Ryan told us all about it on tonight’s show!

I also spoke with Ryan about the other member of Florida’s Congressional delegation of whom I’m especially proud this evening, Alan Grayson, who today introduced the “Public Option Act,” also known as the “Medicare You Can Buy Into Act.”

As she does every Wednesday, Christy Harvey of the Center for American Progress and the wonderfully informative MiccheckRadio.org kicked off the show with me, telling us about some stories we might otherwise have missed.

The Massa madness continued today, and hopefully we spoke about him for the last time on tonight’s show. But, as I admitted yesterday, I watched the Glenn Beck Show–for the first and last time, to see what Massa had to say– and paid special attention to the commercials.  There has been a very successful movement to get advertisers to quit supporting his show ever since he proclaimed that President Obama was a racists who has a deep hatred for all white people (I paraphrased it, but that was the gist of what he said).  I laughed at the commercial for survival seeds and expected all of  the buy gold commercials, but was a bit surprised to see Turbo Tax as an advertisers.  Apparently, last night was their first and last time advertising with them!  Today, Angelo aka @stopbeck tweeted that they’ve pulled their advertising.  So, I invited him on the show to talk about his blog and his work in helping to convince advertisers not to support that offensive excuse for a TV show.

And, since March is Women’s History Month, I invited my friend and HERstorian Amy Simon back on the show to give us some of the juicy stories about the women who paved the way for us to do what we do…