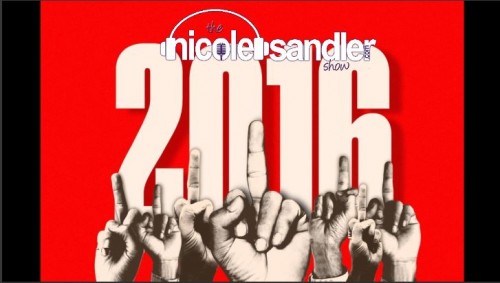 I did a show today. I wasn’t here yesterday or Wednesday, as I wasn’t doing well. More about that in a moment, but first I must explain why, although there was a new show today, there’s no podcast.

YouTube would not connect, and I tried for almost an hour. So, keeping a positive attitude, I just realized today’s show was to be audio only. The software that I use to stream audio usually records a copy of it — as long as I remember to type the date and start the recording process. When I forget to do that, I’m able to pull the audio from the YouTube video. Today I forgot, and there is no YouTube video. Too bad, because it was an epic show, or so I’m told.

As @callmetrip wrote in the chatroom:

callmetrip: @nicolesandler but it was an awesome show. Think of it this way, Wilt Chamberlains 100 point game has no video. The legend is even greater for it. Your year end show was amazing! We all bear witness.

Now, back to the last few days. As I explained during the show today (which you won’t hear if you weren’t there), the holidays are the worst time of the year for people who suffer with depression. And although I have so much to be grateful for: a wonderful, supportive and loving husband without whom I never would have survived cancer, an amazing, feisty, strong-willed, independent, funny, beautiful, loving daughter, and a dog who was better medicine for me than anything the doctors gave me. And, as of my first 3 month post-surgery CT scan, I’m “cancer-free”. There’s more too, but those are the biggies, and enough gratitude to power a lifetime, let alone a shitty year.

But I also suffer from depression, and the enormity of all that happened this year overwhelmed me to the point where I couldn’t cope.

I’m sure that the pain medication I’m still on isn’t helping my psyche, but the stress from this election – over the past 18 months – on top of coming to terms with the fact that I had lung cancer, along with money woes all weigh heavily. But up until election night, I believed there was at least a partial light at the end of the long dark tunnel, that at least we’d be rid of Trump. Instead, now he’s going to be president.

His adolescent behavior is not only unnerving, it’s frightening. The idea of Trump being elected was so laughable that no one with half a brain could envision it. Unfortunately, there are a lot of Amrukians with less than half a brain who actually voted for him. And about the same number as those two groups put together just stayed home. None of the above actually won, but because those non-voters – HALF of the people who could have and should have voted, but didn’t – didn’t say none of the above at the ballot box, we’re stuck with D’ump.

The only prospect worse than a Trump presidency is a Mike Pence presidency. We don’t know what D’ump thinks. (Well, we kinda do, but not really. He doesn’t even know. Whomever he trusts most at any particular moment hasn’t told him yet.) Pence would just give Paul Ryan a green light to destroy our social safety net and more.

But I digress.  After two days of crying and sleeping, I pulled myself out of my funk. Feeling a bit better, I invited Boca Britany Somers over to hang out with us and help me get through the show.

So we talked, we laughed, we willed the year to end already.

And since I couldn’t get YouTube to work, I didn’t get to play this video. I did share the audio, but it’s even better with pictures. So thank you John Oliver.

Now for the mushy part. Thank you for caring about what I have to say. There are a lot of voices out there, and it’s increasingly difficult to cut through the chatter. So I’m grateful you’ve found my show and listen.

We have really rough times ahead, I’m afraid. I have no idea how we’re going to get through it all, but it’ll be easier if we can do it together.

I’m taking off for a few days, so I’ll be back Wednesday. Stay safe.