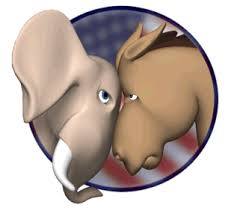 Last week we shuddered as we read the ideals the Republican Party stands for as they released the official 2012 Republican Party Platform.  Talk about a giant leap backwards…  Courtesy of ThinkProgress, here are some of the standout parts:

A further search of GOP Party Platform at Think Progress turned up these frightening headlines:

Today we got the draft of the Democratic Party Platform -to be voted on today- which, although far from perfect, at least moves the nation forward.  From Think Progress,

I don’t understand how anyone could be undecided at this point.  But if you are, all you need do is take a look at the two platforms and decide which party most  closely represents you.  It’s a no-brainer.