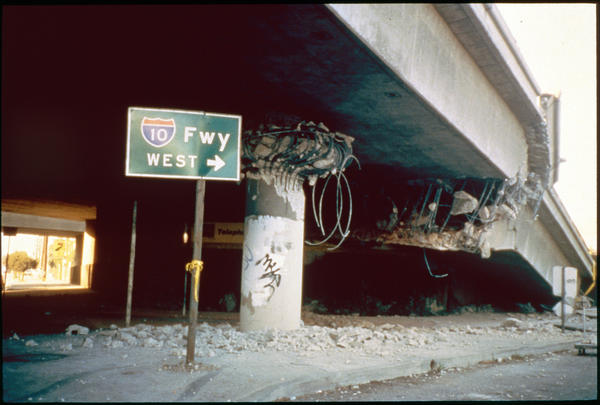 The picture above is the La Cienega Blvd exit of LA’s 10 Freeway, which collapsed during the 1994 Northridge earthquake. It hit at 4:31am that Monday morning, on the Martin Luther King, Jr. Holiday.

On any other morning, I would have driven on that freeway and gotten off at that exit to go to work at KLOS where I produced The Mark and Brian Show.  But I made a spur-of-the-moment-and very uncharacteristic decision the Friday afternoon before, and told my boss Carey Curelop (then PD of KLOS)  that I was going to take Monday off.

MLK Day wasn’t a day off for us, but I had worked through the holidays while Mark & Brian were on vacation, and hadn’t had a day off since before producing our annual Day Before Thanksgiving Day Parade, and M&B Christmas Show.

On any other Mon morning, I’d have been in the shower at 4:31am.

I was living in Santa Monica in a very cool apartment steps from the beach, just across PCH on W. Channel Rd. I never questioned why there was a full -length mirror testing on the bench inside the tub/shower enclosure. But it was there when I moved in.

I somehow made it downstairs in the dark after the earth shook me awake that morning. My car was stuck on the garage that wouldn’t open without electricity, but a neighbor I didn’t know knew who I was, and offered me a ride to the station.

Not knowing how the roads were, we took surface streets. Good thing, as you can see in the photo above how the 10 Freeway had collapsed at La Cienega, the exit to get to KLOS.

Yes, even though I had the day off, I found a way to get to the radio station. That’s what you do when you work in the media and there’s an earthquake.

When I finally got home later that day, I found the mirror in a million pieces in the tub.

Had I not decided the Fri before to take Mon off, I hate to think what else would have been in that tub!

And here we are, 20 years later. Although many more people get MLK Day as a holiday and we have our first African American President in the White House, little else has changed. And that’s sad.

Today on the Show

President Obama used the Friday before a holiday weekend to speak about the NSA and give his response to the Review group’s suggestions on curbing the NSA surveillance programs. I suggest checking out Marcy Wheeler‘s annotated version of his speech, as well as the rest of her analysis and discussion on the issue at Emptywheel.net. Marcy joined us on the show this morning to explain what, if any, changes President Obama will enact.

Holiday weekend or not, the Crooks and Liars staff watches the Sunday Talking Head Shows so we don’t have to! Nicole Belle tells us what we missed in our weekly Fools on the Hill™ segment:

Candy Crowley suggests to the Hoboken mayor that maybe Christie wasn’t holding Hurricane Sandy funds hostage, but to the ‘winner goes the spoils’.

Howard Kurtz accuses MSNBC of partisan witchhunts for their Christie coverage before turning around and talking with his Fox colleagues about Benghazi.

Dianne Feinstein thinks that Edward Snowden might have been helped by the Russians, but also insists that the metadata is only accessible to 22 NSA “professionals.”