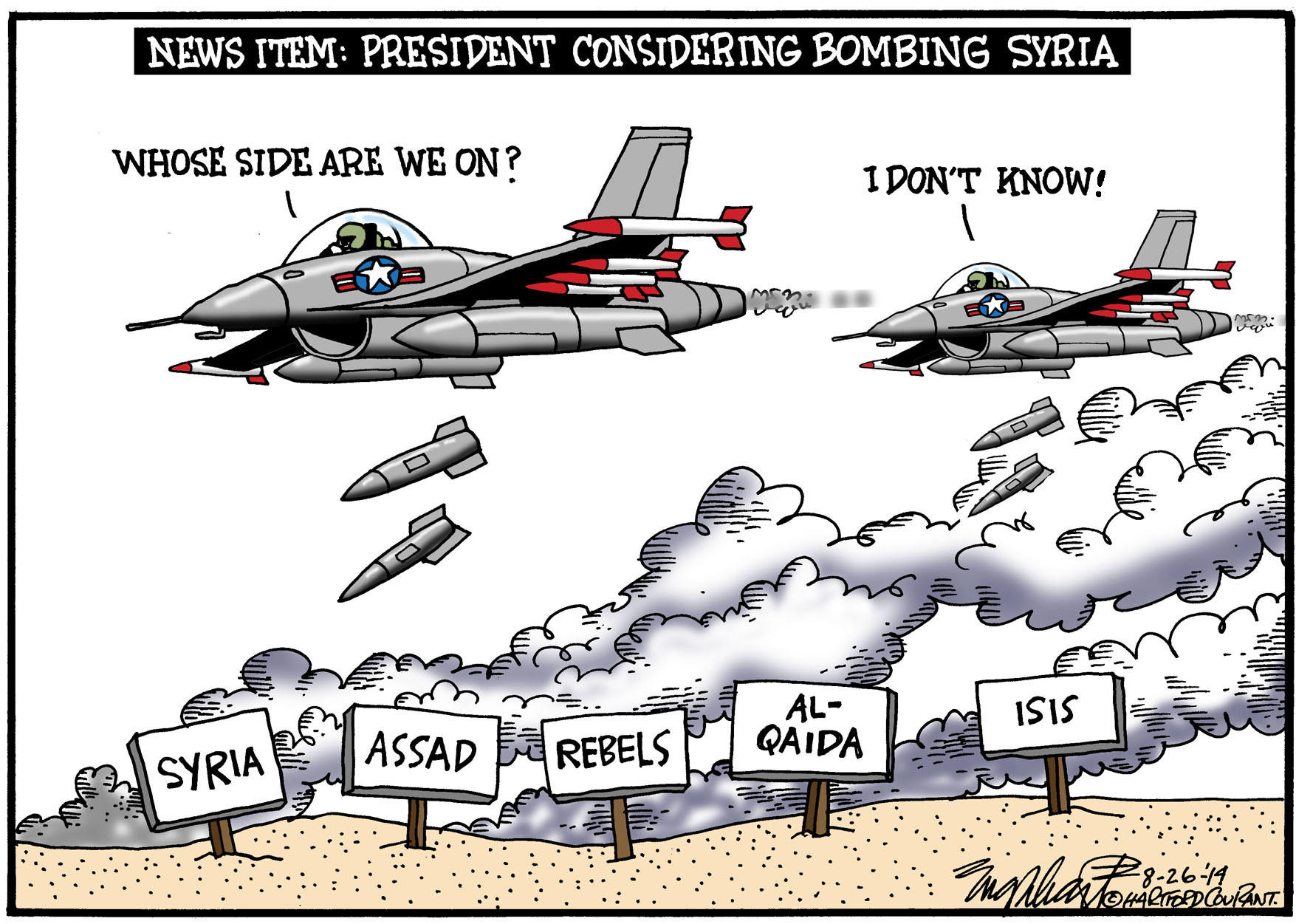 It’s getting more and more difficult to remember the BB years. There’s BC, AD and BB – Before Bush. Before Bush, we had a few decades without being mired in endless wars. But in these AB – After Bush – years, I’m beginning to think we’ll never again know peace.

I try to be optimistic, but with the world seeming to crumble around us, it’s just not looking like peace will come again in my lifetime.

We can’t even tell the difference between whom we’re arming and whom we’re fighting. From Al Qaeda to ISIS (or ISIL) to Assad to Khorasan to the Syrian so-called “moderates” who may include in their ranks the heart-eating guy…  If it weren’t so sickening a situation, it might be easy to laugh at them.

Meanwhile, President Obama spoke at the UN General Assembly today about being at “a crossroads between war and peace; between disorder and integration; between fear and hope.”

Doesn’t he know that he doesn’t have to perpetuate the culture of war?

As I’m writing this, a news item just arrived in my inbox.

A new armed group in Algeria calling itself the “Caliphate Soldiers”  – a re-splinter from Al-Qaeda splinter group ISIS – has, according to AP, beheaded a Frenchman abducted in Algeria in a video posted online on Wednesday, after giving a 24-hour deadline to Paris. Herve Gourdel, a 55-year-old hiker from the southern French city of Nice, was kidnapped on Sunday by Jund al-Khilifa, which demanded France stop its air strikes against IS in Iraq.

Yesterday, he addressed the 2014 Climate Summit and, again, proved the he knows how to deliver a speech.

Sadly, his actions continue to belie his words. It’s been almost two years following his second inaugural address, during which he proclaimed

We will respond to the threat of climate change, knowing that the failure to do so would betray our children and future generations.  Some may still deny the overwhelming judgment of science, but none can avoid the devastating impact of raging fires and crippling drought and more powerful storms.

The path towards sustainable energy sources will be long and sometimes difficult.  But America cannot resist this transition, we must lead it.  We cannot cede to other nations the technology that will power new jobs and new industries, we must claim its promise.  That’s how we will maintain our economic vitality and our national treasure — our forests and waterways, our crop lands and snow-capped peaks.  That is how we will preserve our planet, commanded to our care by God.  That’s what will lend meaning to the creed our fathers once declared.

He has yet to announce any decision on the fate of the Keystone XL pipeline. If he really meant what he said on Jan 20, 2013 or yesterday at the UN Climate Summit, he’d take action, not just speak words.

This morning, I was joined by Susie Madrak of Crooks & Liars. Today, she brought us this piece that tells not only about the idiotic “reporter” sent by PJTV who got schooled by Bobby Kennedy Jr., but she also pointed out the ridiculous counter-productive turn taken by people in the comments section that essentially show us why progressives can’t have nice things.

I needed a good dose of anti-war activism to counter the propaganda being continuously shoved down our collective throats by the corporate media (from Fox, MSNBC and everything in between), so I invited David Swanson of World Beyond War on to counter Dana Milbank’s lopsided view of the peace movement.

And finally, from the “This Must Be Illegal” files, I spoke with Viviana Janer this morning too. Viviana Janer is running for a seat on the Osceola County Commission (Kissimmee, FL which is home to Walt Disney World).

If elected, she’d be the first Hispanic woman to serve on the commission. She’s running against a Republican incumbent named John Quinones, who has the backing of the big corporate interests in that area.

Viviana worked for Marriott Vacations Worldwide. I say “worked” because she was just fired from her job because of a “conflict of interest” – i.e., she’s running for office. Marriott gave her a pretty appalling ultimatum: quit the race or quit this job. (I should also note that Marriott International has given $1000 to her opponent, John Quinones.) Obviously, she didn’t want to quit the race or lose her job. So on Friday, Marriott fired her.

It reads like a pretty clear case of corporate interference in a local election. She’s already won the Democratic primary, so dropping out would cede the election to Quinones. Trying to strong-arm Viviana out of the race would rob the voters of  any meaningful choice. With Viviana in the race, voters have a choice between two candidates: one who is running on a middle class agenda and doesn’t suck up to big business, and one who is more interested in helping his corporate buddies.

If that isn’t illegal, it certainly should be. The Orlando Sentinel picked up the story over the weekend; today it’s all over the interwebs. Let’s hope a more deserving company hires her and that all the publicity gives her a much-deserved electoral win. Check out her campaign website here.

I’ll be back tomorrow with Americablog’s Gaius Publius and whatever else the day brings, radio or not.