Americans shouldn’t have to babysit — or ‘normalize’ — their president #NotNormal 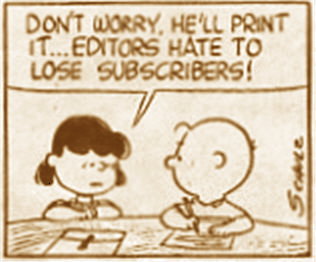 Today’s Los Angeles Times letters to the editor, because our voices matter:

So we are now charged with babysitting the president? You must be kidding me. (“Let’s normalize Trump,” Opinion, March 14)

Normalizing President Trump will only enable him and his administration to enact their agenda and destroy our country. Have we not seen this with the totally inept first travel ban and the horrendous healthcare bill, which will enrich the top earners and strip millions of insurance coverage?

Dan McLaughlin’s statement, “Some of the ways he’s not normal are good: He has open contempt for the swamp of D.C.,” caused me to laugh. Has he not seen Trump’s Cabinet picks? They are the dregs left at the bottom of the swamp.

No, I will not normalize a selfish, misogynistic president. We have a new normal: Resist.

To be forced to use the very word “normalize” in regard to a sitting president should give everyone pause. No one elected to the presidency should be so abnormal as to have supporters scrambling almost daily to apologize for his behavior.

McLaughlin’s article should simply not be necessary. Instead, the GOP must deal for the next four years with a truly odd man whose only redeeming feature may be his signature on its legislation.

No, sir, it is not likely that any amount of quibbling is ever going to make Trump normal.